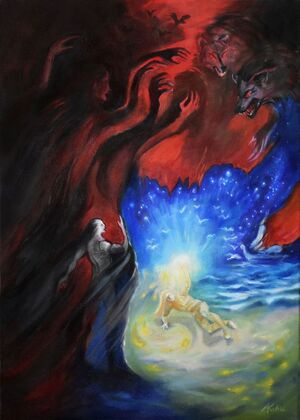 This Canto tells how Beren, Finrod Felagund, and ten companions disguised themselves as Orcs. And travelled northwards as Orc chaptains called Nereb and Dungalef, with their company. Thû from Wizard's Isle spotted them, and brought them in, where he questioned them, suspecting a trick.

Then comes one of the most descriptive paragraphs, of how Thû "chanted a song of wizardry", and how Felagund responded with "a song of staying". They fought back and forth a battle of minds, until at last Felagund's power fell, and they returned to their own original forms. Then how Thû placed them in his dungeons, and every now and then sent down a werewolf to devour one of them, hoping another would name the errand they were on. But "none would yield, and none would tell".