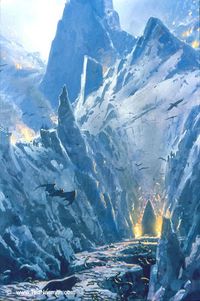 Beren and Lúthien approach Angband by Ted Nasmith
(Note: this does not conform exactly to the description in the Canto)

This Canto starts with a description of Dor-na-Fauglith ("Land under Choking Ash"), but changes its name to "Land of Thirst". Beren gazes across the plain and sees afar Thangorodrim. He gives Curufin's horse leave to depart; the last horse to stand upon that plain. Then he sings his Song of Parting, "grim-hearted, bitter, fierce and fey." But as he ends and begins to stride down toward death, Lúthien Tinúviel comes. Beren wonders and asks where Huan is, but Lúthien knows not.

Finally Huan comes, and brings forth two bodies and lays them at their feet: that of wolf Draugluin, and that of a vampire Thuringwethil. Beren asks why he brought them; were they just trophies of their victory over Thû? But Huan spoke for only the second time in his life, and declares that they must don the bodies as raiments and sneak into Angband. With Elvish magic Lúthien causes them to take on the shape of the bodies, and then they stumble across the thirty desert of Dor-na-Fauglith. At last they reach the gates and towers of Angband, and enter the roots of Thangorodrim.