"[Curufin] inherited most his father's skill of hand."
― Quenta Silmarillion, "Of Eldamar and the Princes of the Eldalië"

Curufin was a Noldorin prince, the fifth of the seven sons of Fëanor and Nerdanel. Curufin was Fëanor's favorite and much like him in appearance, temperament, and skill. He was also the father of Celebrimbor, master jewel-smith of Eregion, who forged the three Elvish Rings of Power.

The Wife of Curufin. Art by Marya Filatova

Curufin was born in Tirion during the Years of the Trees.[2] There he married at some point, and had a son named Celebrimbor, who followed him into exile, although his wife did not.[3]

As with his brothers, Curufin bound himself by the Oath of Fëanor to recover his father's Silmarils, which had been stolen by the Dark Lord Morgoth. The Oath led him and his brothers into exile, commiting the Kinslaying of Alqualondë in order to obtain ships to sail to Middle-earth.[4]

The host of the House of Fëanor reached the shores of Beleriand, and they camped in the Firth of Drengist. Overnight, Fëanor roused Curufin and other men, and burned the ships.[5]:354

After the death of their father, Curufin dwelt with his brother Celegorm in the Pass of Aglon, that led into the Kingdom of Doriath, and they fortified the pass, protecting it and the lands of Himlad.[6] Apparently, living there allowed Curufin to have good relationships with Dwarves, as he became interested in their language Khuzdul, being the only Noldo who won their friendship.[1]

When Eöl was chasing Maeglin and Aredhel for leaving his home in Nan Elmoth to seek refuge in Gondolin, Curufin intecepted him and stated his intent to slay him. However, Curufin decided against this because it was against the laws of the Eldar. In the end, he counseled Eöl to return home, foreseeing his venture will end in death. Eöl did not heed this counsel and eventually entered into Gondolin, leading to both Aredhel's and his own death.

Following the Dagor Bragollach, the two brothers were defeated and had to flee with their people to Nargothrond, where their cousin Finrod welcomed them.[7] 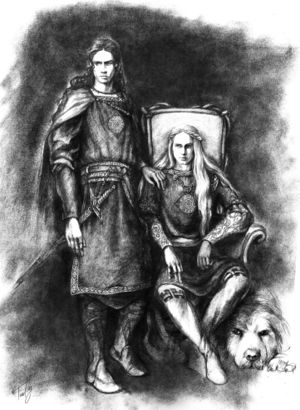 Shortly after, Beren also came to Nargothrond to ask for aid from Finrod, who had made an oath to help Beren's ancestor. Finrod decided to help Beren, but Celegorm and Curufin, remembering their own Oath, persuaded the people of Nargothrond not to follow him, and not to wage open war against Morgoth, making them fearful.[8]

Finrod therefore had to leave with a handful of warriors, including Beren, and later died. His nephew Orodreth ruled in his stead.

Later, Curufin and Celegorm went hunting with Celegorm's hound Huan and found Lúthien, daughter of Thingol, searching for Beren. Feigning to help her, they took her captive and brought her to Nargothrond, for Celegorm had become enamored and would have Thingol give him her hand. However, Huan helped Lúthien to flee, and they freed Beren and other thralls from Sauron. As these thralls returned, the people of Nargothrond perceived the two brother's treachery, and though Orodreth would not let them be slain, he cast them from Nargothrond.

The two brothers met Lúthien and Beren as they fled, and Curufin fought with the latter. Defeated, he had to flee with Celegorm, but sought to slay Lúthien even as he did, and shot Beren instead.[8]

Because of Celegorm and Curufin's evil deeds, Thingol and Orodreth would not join the Union of Maedhros against Morgoth.[9]

Curufin fell in the Second Kinslaying, when the Sons of Fëanor attacked Doriath to seize a Silmaril in the possession of the King Dior. Celegorm and Caranthir died with him during the assault.[10]

His mother-name was Atarinkë ("Little Father"), chosen because of his physical resemblance to his father, resulting being also a resemblance in his mind.[5]:353 Of all the sons of Fëanor, only Curufin did not prefer to use his mother-name.[5]:355