The Green-elves (Q Laiquendi, S Laegrim; also Green Elves[2]) were a clan of the Nandor.[3]

Lenwë was an Elf of the Telerin clan, who set out with the Great Journey of the Elves into the West. When his people found their path blocked by the Misty Mountains, he resolved to leave the Journey and instead led his followers south down the Vales of Anduin, and they became known as the Nandor. After many years, Lenwë's son Denethor set out westward once again, and led some part of the Nandor across the Misty Mountains and the Blue, settling at last in the Land of Seven Rivers beneath the Ered Luin; the land called Ossiriand. 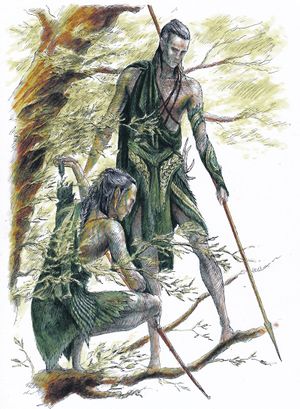 Denethor and his followers did not have peace for long, for war came; soon after his return to Middle-earth, before the Noldor had followed him, Morgoth invaded Beleriand loosing armies of orcs on King Thingol and his allies. Morgoth managed to cut him off from the Falathrim in the west, but not the wide Ossiriand in the east. Thingol called Denethor to his aid and as he attacked the orc-host from the west, the ill-equipped Laegrim pushed them from the east, but suffered great hardship from the iron-shod orcs. Denethor himself was cut off at Amon Ereb and was slain with those nearest about him before Thingol could rescue him; the Elves beat back the Orcs at last. The Laegrim loved him and mourned his loss, and henceforth would take no king. They became reclusive, camouflaging in green, pulling away from the many troubles of Beleriand, and fighting no longer against Belegurth.[1] From that time, they were known as the Green-elves. When the Noldor returned from over the Sea, they gave the Laegrim the name (in Quenya) Laiquendi.

Some left Ossiriand for the guarded forests of Doriath: these settled in Arthórien and became known as the Guest-elves.[4][5]

The hidden people of the Green-elves played little part in history after the First Battle of the Wars of Beleriand as they did not participate in the great events of Beleriand throughout the First Age. Most significantly, they accepted Beren and Lúthien, who came to Tol Galen in the far south of their land, and made it one of the most beautiful places in Beleriand. After the loss of their ancient ally Thingol at the hands of the Dwarves, they went with Beren to avenge him in the Battle of Sarn Athrad. Much later, after the deaths of Beren and Lúthien, one of their lords took up the Silmaril that Lúthien had borne, and brought it to Menegroth where Dior now dwelt.[6]

After the Nirnaeth Arnoediad, the Sons of Fëanor wandered in the lands of the Laiquendi, bereft of lands, often mixing with them.[7]

After the end of the First Age, their fate is not clearly known. Much of their land survived the destruction of Beleriand, and as Lindon came under the rule of Gil-galad. In the early Second Age, some at least seem to have removed to Eriador, and dwelt on the shores of Lake Nenuial.[8] Others went east to live among the Silvan Elves.[9] After this, nothing is known of their fate.

The Sindarin name Laegrim (class plural; sing Laegel, pl Laegil) or Laegel(d)rim, meaning "Green-elves", was a name used by the Sindar of Beleriand for the inhabitants of Ossiriand and Lindon. This term was translated by the Noldor to Quenya Laiquendi.[3][note 1]

Originally, the Green-elves were Noldor in the Silmarillion writings of the 1930s.[11] They remained so in the final Quenta Silmarillion of that period.[12] By the time of the major revisions of the early 1950s they had become Teleri.[13] However, in a late note of c. 1968, Tolkien writes that they were "probably in origin of Noldorin kinship" reverting to the original conception.[14] This, however, was not incorporated into any narrative writing.

In Letters from Father Christmas, green elves are mentioned as kin of the red elves.[15]