"The greatest host came last, and they are named the Teleri, for they tarried on the road, and were not wholly of a mind to pass from the dusk to the light of Valinor. In water they had great delight, and those that came at last to the western shores were enamoured of the sea. The Sea-elves therefore they became in the land of Aman, the Falmari, for they made music beside the breaking waves."
― Quenta Silmarillion, "Of the Coming of the Elves and the Captivity of Melkor"

The Teleri were the third of the Elf clans who took the Great Journey. To them belonged the Valinorean Teleri (known as the Falmari), and the Sindar, Laiquendi, and Nandor of Middle-earth.

At first they were known as Nelyar ("The Third"), and were the largest of the three houses of the Firstborn. According to legend, they were descended from Enel, the third Elf to awake in Cuiviénen, his spouse Enelyë and their seventy-two companions; half of the Avari originally belonged to this clan.[note 1][1]

In ancient times they named themselves Lindar, or "Singers", because they were known for their fair voice.

According to legend, the clan was founded by Enel, the third Elf to awake at Cuiviénen. With him were his spouse Enelyë and their 72 companions, and this clan became known as the Nelyar.

When the Valar decided to bring the Quendi to Aman, they chose three ambassadors. Ingwë, Finwë and Elwë travelled there and tried to convince their people to make the journey. Out of the original 74 Nelyar who awoke at Cuiviénen, 28 refused and became part of the Avari, "The Unwilling".

The Teleri clan was so numerous that it was led both by Elwë and his brother Olwë. They were the last clan to depart, and the only ones who were unwilling to leave the wild lands of Middle-earth and were usually the hindmost of the Great Journey. In their earliest days they had begun the crafting of rafts and paddle-driven boats, and their ships became larger and stronger upon their need to traverse the Sea of Rhûn on their westward journey.[2]

Unlike their brethren who traversed Greenwood the Great, the Teleri chose to circumvent it from the south, after travelling for many years, when they joined the other Clans who had settled in the Vales of Anduin. That land was called Atyamar, until it was afflicted by evil weather and the Elves had to resume their Journey. The Teleri provided boats to cross the Anduin (which was wild and flooded due to the great snowstorms in the Misty Mountains). But many were against this, frightened by the river and the sight of the Mountains.[3] A group led by Lenwë departed from the journey and headed south. They were called the Nandor ("Those who turn back"). Eventually, the other Teleri passed the Misty Mountains and reached Eastern Beleriand near the river Gelion.

That was the time when Elwë fell in love with Melian the Maia and became separated from the Teleri, standing alone in the forest of Nan Elmoth for a long time only staring at her. Olwë became their leader, but some Teleri, especially Elwë's friends and close relatives were searching for him for a long time and refused to continue their journey without him, hoping to find him. Those in Sindarin were known as the Eglath as they forsook the Great Journey.

Being the hindmost, the Teleri were still near Gelion and failed to hear Ulmo's call when the Vanyar and the Noldor travelled into the West. When they learned that the others had already departed, they headed to the shores of Beleriand near the mouth of the river Sirion waiting for Ulmo. The Maia Ossë kept them company while they waited, and became their friend. When they first beheld the sea, the Teleri became enamoured with it, and ever after desired to live close to the shore, being named 'Sea-elves' in Aman. [4]

Later, when Ulmo arrived again with the island ferry, most of the Teleri agreed to travel. Again, there were some who wanted to stay with Ossë, and they became known as Falathrim in Sindarin, with Nowë as their leader.

Out of the 46 original Telerin Eldar who began the Great Journey, only 20 among them arrived in Aman with their offspring, whereas the other 26 firstborn remained in Middle-earth as Sindar or Nandor.[5]

The island was stabilized by Ulmo near the Bay of Eldamar, and it was named Tol Eressëa, The Lonely Island. The Teleri lived there for many years until they felt that they should see the other Eldar who lived in Aman proper. With the help of Ossë they built ships and travelled to the coasts of Aman, where they dwelt. There Olwë built Alqualondë, the greatest city of Teleri, and its people were united with the people of Tirion and Finwë.

In Beleriand, Elwë and Melian recovered from their enchantment. He united the Eglath who stayed back, and the Falathrim who accepted him as King of Beleriand. The folk of both Elwë and Nowë became collectively known as the Sindar. Later they were joined by the Laegil, the Nandor who resumed their journey to the west under Denethor and came to Ossiriand.

Later, when Melkor stole the Silmarils, the Noldor led by Fëanor demanded that the Teleri let them use their ships. When the Teleri refused, they took the ships by force, committing the First Kinslaying. For this reason few or none of the Teleri joined the host of the Valar which at the end of the First Age set out to capture Morgoth for good. It is recounted that the Teleri eventually forgave the Noldor for the Kinslayings, and the two kindreds were at peace again.

The Teleri valued silver above gold, and the Noldor admired the Teleri's silverwork.[6] 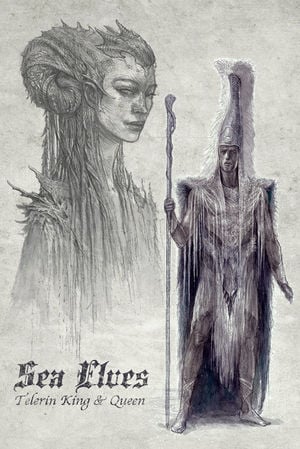 The Teleri spoke the Common Telerin language during the Journey, from which Sindarin (with its dialects of Doriathrin, Falathrin and North Sindarin) and Nandorin were derived, as well as the Telerin of Aman, often considered a dialect of Quenya (if only by virtue that it preserved more of the archaic Common Eldarin features than any other language and remained mutually intelligible with Quenya).

Teleri is the plural of Teler which means "last", root TEL.[source?]

In The Silmarillion the word Teleri refers both to the Third Clan in general, and that branch that made it to Aman, taken from the Vanyar and Noldor point of view; particularly the Teleri of Aman were called Falmari.

Equivalent names of the Teleri were Nelyar and Lindar. Lindar (Quenya "singers", pron. [ˈlindar]) was the name by which the Teleri called themselves.

Another name was Sindarin Glinnil (sing Glinnel), a name which appears to have been used only by the loremasters among the Eldar.[8]

Sea-elves was yet another name of the Teleri, specifically those of that kin who came to Aman and dwelt at Alqualondë (the Falmari), for their love of the sea and reverence of Ulmo. The name "Sea-elves" was rendered Veaneldar in Quenya,[9] consisting of vea(n) ("sea") + eldar ("elves").[10]

The Teleri were also known by many other names: the Foam-riders, the Singers of the Shore, the Free, the Swift, the Arrow-elves (for their love of bow and arrow), the Elves of the Sea, the Ship-wrights, the Swanherds, the Gatherers of Pearl, the Blue Elves, and the people of Olwë.[11]

In the early versions of Tolkien's mythology (see: The History of Middle-earth), they were known as Solosimpi ("Pipers of the Shores"), while the name Teleri was given to the clan of Elves known in the published version of The Silmarillion as Vanyar.