The Awakening of the Elves took place long before the First Age of Middle-earth, during the Years of the Trees. In the Elves' account, the Awakening happened at the precise moment when Varda finished creating additional stars in the night sky. She had just left the council of the Valar, and was afraid that the Firstborn would come in darkness, and that Melkor would find it easy to subvert them.[1]

According to a legend of the Elves called Cuivienyarna, the first Elves were awakened by Eru Ilúvatar near the bay of Cuiviénen. The first Elf to awake was called Imin, the First. Next to him lay Iminyë, who would become his wife. Nearby awoke Tata, the Second, and Tatië his wife. Awakening also was Enel, the Third, and Enelyë his wife.[source?]

Finally they set out again, but Imin thought to himself that since each time they had found more Elves, and his folk was least in size, he would now choose last. They came across eighteen pairs of Elves, who were watching the stars, and Tata and Enel waited for Imin to claim them for his people, but Imin told them he would wait, so Tata added them to his folk. They were tall and had dark hair, and they were the fathers of most of the Ñoldor of later times. The ninety-six Elves now spoke with each other and invented many new words, but then they continued their journey. Next they found twenty-four pairs of Elves, who were singing without language, and again Imin was offered the choice, but refused. Therefore Enel chose them as his people, and from them came most of the Lindar of later times.

The hundred and forty-four Elves now dwelt long together, until all had learned the same language, and they were glad. But then Imin said it was time to seek more companions for him, but most of the others were content and did not join him. So Imin and Iminyë and their twelve companions set out alone, and they searched long near Cuiviénen, but never found any more companions. Since all Elves had been found in pairs of twelves, twelve became the number they counted with ever after, and 144 was for long their highest number; and in none of their later tongues was there any common name for a greater number. 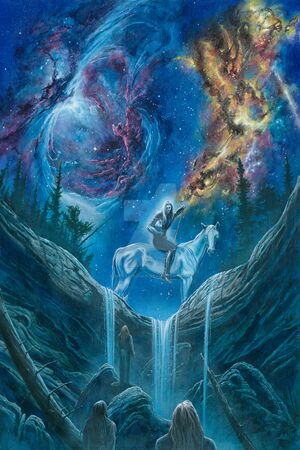 Orome Discovers the Lords of the Elves by Kip Rasmussen

Melkor was the first to learn of the Awakening. He soon began sending evil spirits among the Elves, who planted seeds of doubt against the Valar. It is also rumoured that some of the Elves were being captured by a Rider if they strayed too far, and as later turned out these were brought to Utumno and twisted into Orcs.

One day, Oromë came across the Elves and realised who they were. At first the Elves were suspicious of him, fearing he was the Rider who captured the Elves, and because of the lies of Melkor. Nevertheless, three lords of the Elves agreed to come with Oromë to Valinor. These were Ingwë of the Minyar, Finwë of the Tatyar, and Elwë of the Nelyar. In due time, Ingwë, Finwë and Elwë returned to Cuiviénen, and told the Elves of the glory of Valinor, and there befell the Sundering of the Elves. All the Minyar and half of the Tatyar were persuaded, along with most of the Lindar, and followed Oromë into the west on the Great Journey. These have been known ever since by the name Eldar, or "Star-folk", which Oromë gave to them in their own language. The remainder of the Tatyar and Lindar remained suspicious, or simply refused to depart from their own lands, and spread gradually throughout the wide lands of Middle-earth. They were after known by the name Avari.

The tale of Imin, Tata and Enel, known as Cuivienyarna is a very late writing by Tolkien published as an appendix to Quendi and Eldar. It is supposed to be a legend preserved in almost identical form among both the Elves of Aman and the Sindar, a surviving Elvish "fairytale" or child's tale, mingled with counting-lore.[2]