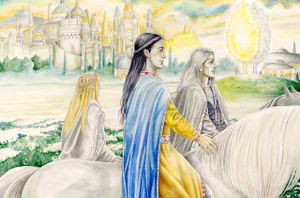 The first Elves awoke in Middle-earth near the bay of the Sea of Helcar, called Cuiviénen, in Y.T. 1050[3]. Oromë, the huntsman of the Valar, while travelling near the Orocarni mountains, discovered the Elves and became friends with them.

Later, the Valar decided to call the first Children of Ilúvatar to Valinor. The elves regarded this call with suspicion, so Oromë selected three elves to follow him into Aman and report back what they have seen, in the hopes that they could assuage the fears which were seeded into the hearts of the elves by Melkor. The three elven ambassadors were Ingwë, Finwë and Elwë, who would later become kings of the three factions into which the elven race was split.[4]

Enamoured by the wonders of Valinor, Finwë and his other two companions returned towards the Middle-earth and attempted to convince their respective peoples to follow them back into Aman. Those who agreed to follow Oromë received the name Eldar. Among them were Finwë's people, who would eventually become known as the Noldor. They later became students of Aulë the Smith.[4] Finwë's eldest son, Fëanor, would become the greatest craftsman among the Elves of Valinor.[5]

Upon arriving in the blessed realm of Aman, Finwë was troubled only by the separation from his friend Elwë who chose to remain in Beleriand. The Noldor settled on the hill of Túna, raised for them by the Valar and, led by Finwë, they lived in the city of Tirion, which they shared with the Vanyar. It was during the building of Finwë's house that the masons found the earth-gems from which they crafted countless jewels to be given freely for the enrichment of Valinor. Later, Ingwë and his people left the city of Tirion and Finwë remained the only king to rule in Tirion.[5] 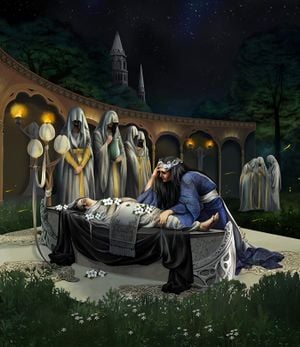 Finwë's first wife was Míriel Serindë, skilled in all things that required fineness. From their love a son was born, Curufinwë, who would later become known as Fëanor. As he was brought into the world, he depleted Míriel's strength and zest for life and she requested to be allowed to rest in the gardens of Lórien. Finwë was deeply saddened by this event. He did not wish to leave the young child without a mother, nor did he want him to be their last. But as his wife explained that what would have nourished many children was all invested in Fëanor, he had no other choice but to accept her request. And thus Míriel, with Manwë's counsel, was placed asleep in Irmo's gardens. Her fëa eventually departed from her body and she became the first person to die in Aman.[6]

But Finwë was not content in living alone and he sought to marry for the second time. His second wife was Indis the Fair, a golden haired Vanya whom he loved and rejoiced in. She gave him two sons, Fingolfin and Finarfin, and two daughters, Findis and Írimë[7]. Though he was now blissful again, the shadow of Míriel never left the House, especially since Fëanor opposed his father's second marriage.

After three ages of imprisonment, Melkor was released from the duress of Mandos and, as he gained the trust of the Valar again, he was eventually allowed to roam freely in Valinor.[6] The treacherous Melkor lusted for the Silmarils, three great jewels made by the hands of Fëanor, at the might of his skill, and ever he sought a way to steal them. He had sown such lies that all the Noldor began to feel strife and mistrust, against themselves, against the other Elves, and even against the Valar. 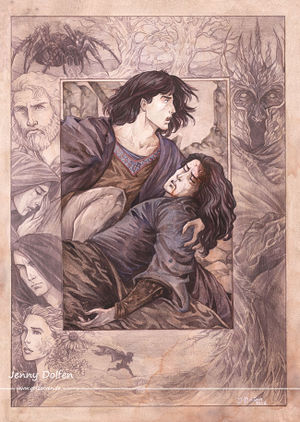 The House of Finwë was no exception. There was already argument between his sons, and these events only served to deepen these rifts. Finwë called a council and tried to moderate them towards one another. Fëanor arrived with a sword and threatened Fingolfin with it. Soon after that, the Valar called Fëanor to answer for his actions. The stem of the evil was exposed and Melkor's covert actions revealed. However, Fëanor was sentenced to twelve years of exile, and he removed himself north, to the fortress of Formenos. Due to the great love he had for his eldest son, Finwë renounced his throne as the King of the Noldor and followed Fëanor into exile.[8]

Melkor went to Formenos and told Fëanor that the Silmarils would not lie safe within the realm of the Valar, and offered to help Fëanor go to Middle-earth. Fëanor perceived that Melkor wanted the Silmarils for himself. He rejected Melkor, while Finwë sent messengers to Manwë. It was during a time of festival that Melkor returned. All the people of Valinor were engaged in the festivities except Finwë, who, out of devotion for Fëanor and bitterness for his son's exile, chose to remain in Formenos, thus refusing to obey Manwë's call.[9] After Melkor and Ungoliant destroyed the Two Trees of Valinor, they headed towards Formenos. Alone Finwë had the courage to stand before the horror of the Darkness. There, before the doors of Formenos, the former King of the Noldor was killed and the first blood was spilled in the realm of Aman. Melkor forcefully entered the fortress and stole the Silmarils.[10]

After his death, Finwë dwelt for a time in the Halls of Mandos where he met Míriel, his first wife, again. Later, when the Valar agreed that Finwë should be brought back to life, he instead decided not to, thus giving Míriel a chance to be reincarnated.[11]

The name Finwë is said to be one of the oldest recorded names of the Eldar. It is not certain if Finwë had any clear meaning, but it can be analysed as fin-, derived from Common Eldarin PHIN ("hair") + -wë (suffix generally used for male names).[12]:340

In the Sindarized forms his son's names, the name Finwë is given reduced as fin. Treated as a proper name, the Sindarin equivalent would have been Finu, or Fim in North Sindarin.[12]:344

In The Book of Lost Tales, the lord of the Noldoli was also called Nólemë‎‎, or Finwë Nólemë‎‎. He was the father, rather than grandfather, of Turgon, and was unrelated to Fëanor. Nólemë‎‎ was one of the original Elven ambassadors sent to Valinor, and he afterwards led the Noldoli on their journey there.‎‎[14] When Fëanor called for the Noldoli to abandon their home of Kôr in Valinor, Nólemë‎‎ counselled against this, but his wisdom was paid little heed. Not wishing to be separated from his people, Nólemë‎‎ left Valinor with them.[15]

In an early outline for The History of the Exiled Gnomes, Nólemë‎‎'s death took place soon after the birth of his son Turgon at the Waters of Asgon, where the Noldoli had encamped. In a later outline, Fëanor rather than Nólemë‎‎ died at Mithrim (Asgon). The Noldoli then left Mithrim and the Land of Shadows, and Nólemë‎‎'s host grew after this escape. His chief camp was established by Sirion. Nólemë‎‎'s son Turgon was born at some point during this time. Nólemë‎‎ was the leader of the Noldoli in the Battle of Unnumbered Tears that occurred later. He was isolated and slain during the battle, and the Orcs cut out his heart. Turgon rescued his father's heart and body, and the Scarlet Heart became Turgon's emblem. Nólemë's role of leadership and death in the Battle of Unnumbered tears would be filled by Fingon in the later legendarium.[16]

In the first drafts of the genealogy, Finwë had four sons: the youngest was named Finrun[17], but he was dropped after that, thus Finrod (later Finarfin) was Finwë's youngest son from then on.

In a later version, Finwë had three daughters by Indis: Findis (as their first child), Faniel (as their third), and Finvain (as their youngest).[18] In yet later versions, Faniel was apparently dropped, while Findis and Finvain were kept. Finvain (renamed Írimë) was moved to after Fingolfin, thus Finarfin was once again the youngest child of Finwë.