Of Fëanor and the Unchaining of Melkor

Of Fëanor and the Unchaining of Melkor is the sixth chapter of the Quenta Silmarillion section within The Silmarillion. 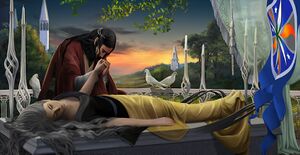 There was much glory and bliss during the days of the Noontide of Valinor. In those days the Noldor learned great skill of craftsmanship, and Rúmil of Tirion first created signs for writing. The son of Finwë and Miriel was also born during this time. He was called Fëanor. However, after the birth of Fëanor, Míriel was consumed in body and spirit, and longed for release from life. Finwë was troubled, and Míriel departed to Lórien, where it was hoped she would find healing and rest. But even as she lay down to sleep, her spirit left her body and came to the Halls of Mandos, and Finwë grieved the loss of his wife.

He afterwards devoted all of his love to his son Fëanor, who grew to be mightiest among the Noldor in body and mind. Fëanor became skilled in the making of gems and bright jewels. He was wedded to Nerdanel, whose father Mahtan taught him much of the working of metal and stone. To Fëanor Nerdanel bore seven sons.

Now Finwë the father of Fëanor wedded Indis, his second wife, and was happy again. But Fëanor cared little for Indis, or for her sons, Fingolfin and Finarfin, and there was division between them. It came to pass that Melkor was granted pardon, and was released to dwell in Valmar, having served his term. For Manwë perceived not the evil that remained in Melkor's heart, though not all the Valar were deceived. And Melkor afterwards feigned friendship with the Noldor, teaching them much. Many were eager to learn what he taught, but Fëanor despised him most among the Eldalië.