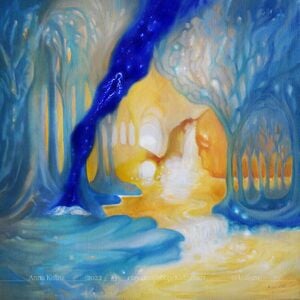 The death of Míriel by Anna Kulisz

The Children of Ilúvatar (Elves and Men) are described as existing in two parts: they have a "spirit" or "soul" called a fëa which comes from the Secret Fire of Ilúvatar, and a body or hröa which is made out of the material of Arda. The Elves compared the relationship of hröa and fëa to a House and an Indweller. For this reason, when death (which is the separation of the two) occurred, the fëa was said to be "houseless" or "in exile". Fëar are said to come from beyond the created Universe (that is, Eä), directly from Ilúvatar, while hröar are of course begotten by parents. According to the Elves, the fëa is nearly powerless without the hröa, and likewise the hröa would die without the fëa. Only when they are together are the Children of Ilúvatar complete beings who can take part in the history of the world, for which reason they are called the Incarnates by the Elves.

Strictly speaking, only the souls of the Incarnates can be referred to as fëar. The spirits of those not designed to dwell in a body (namely, the Ainur) are called ëalar or "beings". 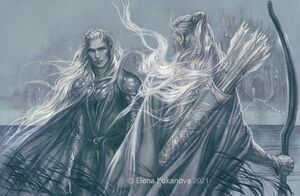 Celegorm and Beleg at the gates of Mandos by Elena Kukanova

The Elves' fate is to live as long as Arda exists; they are bound to the world and cannot leave it. Unlike Men, Elves do not die of disease or of old age. For this reason, their hröar are much more well adapted to the presence of their fëar than Men. Their spirits are in considerably greater control of their bodies. In turn, the Elves' hröar are much more durable than those of Men, and they can heal from wounds that would be fatal to mortals.

However, since fëar are indestructible within the world, while hröar can be broken by the disorders of Arda Marred, "death", which is their separation, is an ever present risk of existence in Middle-earth, even for the Elves. They may be slain or lose the will to live, for instance because of grief. When an Elf dies, the fëa leaves the hröa, which then "dies" and is reabsorbed into Arda. The fëa is called to the Halls of Mandos, where it is judged. After a time of Waiting, the fëa may be reincarnated into a new-born body that is identical to the previous hröa if allowed by Mandos. It is only by coming to Mandos that an Elvish fëa can hope to be reincarnated, as the Elves do not possess this ability in themselves. Alternatively, a fëa might decide to stay in Mandos until the end of Arda, or it may be denied reincarnation, if it had done much evil in life.

For slain Elves, going to the Halls of Mandos was an option and not a requirement; their fëar could refuse the summons of Mandos and remain in Middle-earth, though if they made this choice they could not be reembodied. Refusal of the summons was seen as a sign of taint in the fëa, since Mandos' call is backed by the authority of the Valar, and because the presence of the Dark Lords Morgoth and Sauron caused most fëar to flee to Mandos in terror of the power of the Shadow. Many who resisted the summons in those Ages succumbed to the "counter-summons" of the Dark Lords, falling under their dominion.[1] It was said that in later Ages, more and more Elvish fëar chose to ignore the summons and instead haunt places they had frequented in life. Because these fëar in many cases had unworthy motives (such as the desire to possess the hröar of others), it was forbidden to the Living to commune with them. Sauron's title "the Necromancer" might have referred to his practice of mastering these Houseless fëar and using them to do his will.

Due to the Marring of Arda, the Elves living in Middle-earth suffered a weakening of their hröar over long periods of time. This waning caused their fëar to consume their bodies, so that in the end they became much like wraiths. It was the weakening of the hröar of the Elves that brought about the Dominion of Men and the departure of the Eldar into the West: the Elves in Middle-earth could only avoid this grievous process by leaving the lands they loved and sailing to Aman, for such waning of the body did not exist there. In the West, the Elves could maintain a normal incarnate state.

The situation of Men is much different from that of the Elves: a Mannish fëa is only a visitor to Arda, and when the hröa (inevitably) dies, the fëa leaves Arda completely. This severance of fëa and hröa happens after a short time, especially as the Elves measure it. For this reason, it is said that Men are not bound to the fate of Arda as the Elves are, and are released from Time itself. This mode of mortality is called the Gift of Men by the Elves, and is a fate unique to them. It is important to note that Men themselves, however, rarely view death as a Gift, and even have traditions stating that they also possessed immortality (or at least much longer life) until they were corrupted by Morgoth.

What happens to Men after death is unknown to any of the inhabitants of Arda, except perhaps some of the Valar. The Elves said that they went to the Halls of Mandos as well (though without choice in the matter), and were there given up to Eru, though this is mere speculation. There were some that were cursed to stay in Arda, specifically the ones cursed by Isildur and became known as the oathbreakers. However, the Valar proclaimed to the Elves that eventually the race of Men would participate in the Second Music of the Ainur, whereas the ultimate fate of the Elves is unknown.

Because the fëar of Men must leave the world while the Elves must remain in it until its end, it is said the fates of Men and Elves are sundered.

There were at least four marriages between Elves and Men, which resulted in Half-elven children. Those who were in contact with the Valar were given the choice to be numbered among Elves or Men. This choice was of course mainly one of the fëa, not the hröa. For example, Lúthien Tinúviel chose the Fate of Men, and so her fëa passed out of Arda and was lost to her kin.

Among those who did not have contact with the Valar, such as (possibly) the Lords of Dol Amroth, Mannish mortality appeared to be the default state.

It was not only the Children of Ilúvatar who possessed fëar: they were also granted to the Ents and some animals, such as Huan the Hound and the great Eagles (but see this section of the article). When Ilúvatar adopted Aulë's children, the Dwarves, he granted them fëar of their own also.