"The Shadow that bred them can only mock, it cannot make: not real new things of its own. I don't think it gave life to the Orcs, it only ruined them and twisted them; and if they are to live at all, they have to live like other living creatures."
― Frodo in The Return of the King, "The Tower of Cirith Ungol"

The origin of the Orcs is never definitely explained in J.R.R. Tolkien's works. Throughout the years, he changed the explanation, but he was doubtful because of the theological implications of an evil race and the relations of fëa and hröa in his cosmology. As Tolkien died without deciding on a final explanation, the canonicity of the origin of Orcs is a popular debate in the fandom. Listed here are the different origins of the Orcs given in Tolkien's texts, ordered chronologically.

The first conception in The Book of Lost Tales (1917-1920) describes explicitly how Melko created Orcs or Goblins directly from earth:

...for all that race were bred by Melko of the subterranean heats and slime. Their hearts were of granite and their bodies deformed.[1]

The text also mentions Noldoli being twisted by Melko and mingled among the Orcs, so that they were even confused as being of that race, but as Christopher Tolkien comments, that notion is unrelated with the origin.[2] Created directly by him, Orcs are thus called "broodlings of Melko"[3] or "children of Melko".[4]

In the following and more serious revision of his mythology, Tolkien kept the same origin: in the Quenta Noldorinwa (1930s) it is written that Morgoth created the Orcs in Utumna, before the Awakening of the Elves: "the hordes of Orcs he made of stone, but their hearts of hatred".[5] However, in The Earliest Annals of Beleriand this happens in Angband after the theft of the Silmarils.[6]

Following the idea that Morgoth created the Orcs after the Awakening of the Elves, Tolkien developed it in the Quenta Silmarillion of 1937. There it is said that, after the destruction of the Two Lamps, Morgoth created many evil creatures of different shapes, "yet the Orcs were not made until he had looked upon the Elves, and he made them in mockery of the Children of Ilúvatar".[7] Later in the text is explained that they were made of stone, like in the previous version.[8] Therefore this origin is a development of the previous one, but already points to the great sin of the mockery of the Children of Ilúvatar.

The same explanation is mentioned in the second version of The Fall of Númenor, written in the same years.[9] 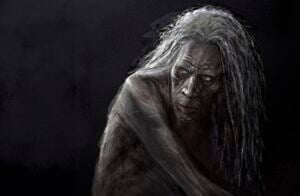 Origin of the Orcs by Turner Mohan

In the Annals of Aman (1950s) appears the most known origin: in the Y.T. 1085, those Elves who ran from Oromë were captured by Melkor and taken to Utumno:

But of those hapless who were snared by Melkor little is known of a certainty. [...] Yet this is held true by the wise of Eressëa: that all those of the Quendi that came into the hands of Melkor, ere Utumno was broken, were put there in prison, and by slow arts of cruelty and wickedness were corrupted and enslaved. Thus did Melkor breed the hideous race of the Orkor in envy and mockery of the Eldar, of whom they were afterwards the bitterest foes. For the Orkor had life and multiplied after the manner of the Children of Ilúvatar; and naught that had life of its own, nor the semblance thereof, could ever Melkor make since his rebellion in the Ainulindalë before the Beginning: so say the wise. And deep in their dark hearts the Orkor loathed the Master whom they served in fear, the maker only of their misery. This maybe was the vilest deed of Melkor and the most hateful to Eru.[10]

As Christopher Tolkien comments, this new origin includes the explicit idea that Morgoth could not make anything with life after his rebellion.[11] This was the text Christopher used for his edition of The Silmarillion (chapter 3), although while revising the Annals, his father wrote a note in the margin: "Alter this. Orcs are not Elvish".[12] It is notable however, that the text itself is not sure about the origin, but only presents what "the wise of Eressëa" held, which might not be true. This in-world aspect is also used in another essay, in which Tolkien wrote that although Morgoth could not beget anything, the Eldar believed he had bred Orcs by corrupting Elves and Men.[13] 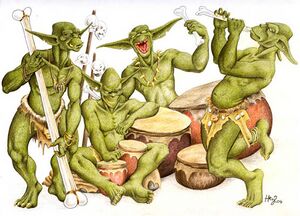 In later years, Tolkien revised several aspects of his legendarium, but never had the chance to apply them to the narrative. He wrote different origins for the Orcs, which Christopher gathers in Myths Transformed. The first origin is an essay from c. 1959. Tolkien begins by mentioning the case of Aulë and the Dwarves, in which it is clear that only Eru could give reason and free will to new creatures. Orcs often rebelled against Morgoth or Sauron, or criticized them; therefore, Orcs had to be pre-existing creatures, not being utterly controlled by their Lord unless directly. Then they would be beasts with the capacity for speech, like parrots, but without rational souls (fëar). Morgoth would have deformed them to resemble the Children of Ilúvatar in a blasphemous mockery and taught them to speak. A similar case would be the Eagles and Huan, who were taught language and physically improved by the Valar.

This origin implies that Morgoth could actually corrupt a whole race against the will of Eru. However, Morgoth did this by dispersing his power: the evil wills of the Orcs only had their origin in his, even if another agent like Sauron could take control of them. As hate is non-cooperative, Orcs could rebel while still remaining in their allegiance to evil (Morgoth).[14]

In the text about the previous explanation, Tolkien still mentions the terrible possibility of an Elvish strain in the Orcs. This would result on them having fëar, which after death would have to wait in Mandos till the End. But as Christopher comments, this is a direct contradiction with what had been stated about the Orcs being nothing more than "talking beasts".[15] However, Tolkien develops the idea of the Elvish strain in a separate note, although not with much detail. Returning to the idea that Morgoth could not create new creatures with independent wills, it is probable that Orcs had a "mixed origin", using corrupted Elves and Men. Morgoth would have among them corrupted minor spirits, which took terrible and similar bodily forms in order to dominate. Christopher notices that the concept of embodied Maiar among Orcs appears in the previous text, in which it is said that they could have been primitive Orcs.[16] That previous mention also includes the notion that the Maiar could practice embodied procreation, causing their own detriment, but there is no statement about Orcs coming from them. 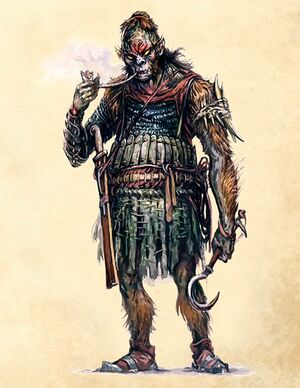 Half orc by Jan Pospíšil

In these late revisions, Tolkien had proposed that the Awakening of Men happened in some period before the Great March of the Eldar, when Melkor was still in Middle-earth.[17] This notion is put in relation with the origin of the Orcs in an appendix to Quendi and Eldar (1959-1960). The essay begins by noticing that Elves did not meet any Orcs before the Great March, and this is related to the fact that Men had awakened recently. Although Tolkien still finds chronological problems, he here develops the idea that Orcs came from Men:

Finally, there is a cogent point, though horrible to relate. It became clear in time that undoubted Men could under the domination of Morgoth or his agents in a few generations be reduced almost to the Orc-level of mind and habits; and then they would or could be made to mate with Orcs, producing new breeds, often larger and more cunning. There is no doubt that long afterwards, in the Third Age, Saruman rediscovered this, or learned of it in lore, and in his lust for mastery committed this, his wickedest deed: the interbreeding of Orcs and Men, producing both Men-orcs large and cunning, and Orc-men treacherous and vile.

Therefore, the Wise always taught that Orcs were not evil in their beginning and deserved compassion, even if they must be fought. However, granting them mercy was hard in times of war, and Morgoth had utterly convinced Orcs that Elves and Men were crueler than themselves. Besides, they were so controlled by their Lord, that when Morgoth was expelled from Arda, they scattered without control. Their lives tended to be controlled by a master. Hence, Sauron took control of them thereafter, even achieving greater control than Morgoth. With Sauron, Tolkien finds a solution to the chronological problems: Melkor was indeed the one who had the idea to breed Orcs in mockery of Men, but only Sauron had the patience and cunning to accomplish this. Thus the idea came from far back in Melkor's mind, but the actual breeding only began after the Awakening of Men. During the Chaining of Melkor, Sauron hid in Middle-earth and continued with his work of breeding Orcs. Thus, when Morgoth came back he found great hosts under his service.[18]

This same origin can be found in the unfinished account of the Drúedain that Tolkien wrote in his last years. While mentioning the merry laughter of the Drúedain, a note explains that if someone declared that Morgoth might have created Orcs from the Drúedain, the Eldar answered: "Doubtless Morgoth, since he can make no living thing, bred Orcs from various kinds of Men, but the Drúedain must have escaped his Shadow; for their laughter and the laughter of Orcs are as different as the light of Aman from the darkness of Angband". However, both races considered each other as renegades, which causes some to think there was actually some remote kinship.[19]