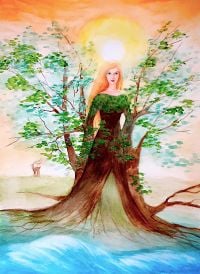 Yavanna sometimes took the form of a tree. Art by Amani Warrington

Fana is a Quenya term used to describe the physical form which is taken on by the Ainur when they desire to have tangible bodies.[1]

"Now the Valar took to themselves shape and hue; and because they were drawn into the World by love of the Children of Ilúvatar, for whom they hoped, they took shape after that manner which they had beheld in the Vision of Ilúvatar, save only in majesty and splendour. Moreover their shape comes of their knowledge of the visible World, rather than of the World itself; and they need it not, save only as we use raiment, and yet we may be naked and suffer no loss of our being. Therefore the Valar may walk, if they will, unclad, and then even the Eldar cannot clearly perceive them, though they be present. But when they desire to clothe themselves the Valar take upon them forms some as of male and some as of female; for that difference of temper they had even from their beginning, and it is but bodied forth in the choice of each, not made by the choice, even as with us male and female may be shown by the raiment but is not made thereby."
― Ainulindalë

Unlike the Children of Ilúvatar, the Ainur take on a body by choice, wearing or going without physical form as mortals wear or can go without clothing.[2] Being inherently spiritual beings, ëalar, they did not need material bodies to be whole in that fashion that fëar, the spiritual component of Incarnates, need to be joined with hröar.[3]

This physical form equivalent to the hröa is known as a fana, which originally meant "veil, raiment".[1] However, the fana differs much from the hröa: it does not belong to the nature of the Ainur, even when it is also made of physical matter. Thus the High Elves personally knew that the fanar were not illusions, but a physical way that the Valar had to communicate with them.[4]

Although the Ainur are angelic beings of spirit, they each possess a specific gender, male or female, and this gender is part of who they are regardless of whether or not they take on a fana. When they do take on a physical form it is a representation of their gender. Manwë Súlimo, for example, takes for himself a fana in the form of a male, that of a great king. His wife, Varda Elentári clothes herself with the fana in the form of a great and beautiful queen.[5] A more known example are the Istari, who came to Middle-earth with the fanar of old wise men.[4]