The Woodland Realm[4] was the great kingdom of the Silvan Elves in Mirkwood.

The Woodland Realm was established in S.A. 750 by Oropher, a Sindarin Elf of Doriath, after the War of Wrath.[3] Unlike most Sindar, Oropher and his household declined the Valar's offer to depart from Middle-earth for Valinor. Instead, he migrated eastward from Lindon and became the King of the Silvan Elves east of Anduin.[5] The few Sindar who had come with him soon merged with the Silvan Elves, adopting their customs and language and taking names of Silvan form and style.[6] Oropher and his household wished to return to the simple existence natural to the Elves before they had been disturbed by the Valar.[6]

Originally, Oropher's realm encompassed the south of Greenwood,[6] with dwellings about the hill of Amon Lanc.[5] However, throughout the Second Age, he and his people migrated north three times.[5] According to one tradition, the first movement was northward beyond the Gladden Fields, due to Oropher's desire to distance himself from the increasing encroachments of the Dwarves of Khazad-dûm and his resentment of the intrusions of Celeborn and Galadriel in Lothlórien.[6] However, his people did maintain constant intercourse with their kin west of the Anduin.[6]

Oropher was also disturbed by the reports of Sauron's rising power, and by the end of the Second Age he dwelt in the western glens of the Emyn Duir, and his numerous people lived and roamed in the woods and vales westward as far as Anduin, north of the ancient Dwarf-Road.[5]

In S.A. 3430, Oropher led the forces of the Woodland Realm against Sauron as part of the Last Alliance of Elves and Men, and was slain during battle.[6] 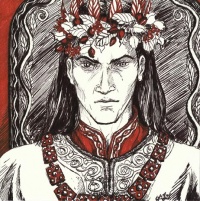 Around T.A. 1100, an evil entity known as the Necromancer (later identified as Sauron) created a stronghold on Amon Lanc called Dol Guldur.[7] As the Shadow fell upon Greenwood the Great and spread ever northward, Thranduil's realm retreated before it, until at last Thranduil established his realm in the north-east of the forest and delved there a fortress and great halls underground.[6] His realm was also protected by the Enchanted River[8], which could cause one to sleep and dream deeply, whilst the Elvenking's Halls served as the chief fortress of the realm.[9]

Thranduil's realm is said to have extended into the woods surrounding the Lonely Mountain and growing along the west shores of the Long Lake, before the coming of the Dwarves exiled from Moria and the invasion of the dragon Smaug.[6] The Woodland Realm did trade with the neighbouring realms of Erebor and Dale, and imported wine from Dorwinion via the River Running. The former traffic came to an end with the destruction of Erebor by Smaug in T.A. 2770[7] but again resumed after the Battle of Five Armies.[10]

On 20 June 3018, a force of Orcs attacked the Woodland Realm (orchestrated by Sauron),[1] the purpose of this raid being to provide a distraction and facilitate the escape of Gollum,[13] who had been entrusted to Thranduil's care by the Ranger Aragorn.[1]

In the wake of this, Thranduil sent his son, Legolas, to deliver news of Gollum's escape to Aragorn and Elrond in Rivendell. Upon arriving, Legolas participated in the Council of Elrond as an ambassador of the Woodland Realm where the full details of Sauron's resurgence were revealed.[2]

Meanwhile, on 15 March 3019, Sauron's forces invaded the Woodland Realm in force and there was a long battle under the trees and great ruin of fire; but in the end Thranduil had the victory. On the Elven New Year (6 April), Thranduil met Celeborn, Lord of Lórien, and the two agreed to rename the forest Eryn Lasgalen. Thranduil took the area from the northern eaves of the forest south to the Emyn Duir for the Woodland Realm.[13]

After the War of the Ring, the Silvan Elves of the Greenwood, including those of the Woodland Realm, remained untroubled.[13] Many folk of the realm removed south to Gondor to restore the beauty of the South-kingdom, especially Minas Tirith and Ithilien.[14][15]

The eventual fate of the Woodland Realm is unknown.

The foundation of the Woodland Realm is disputed:

This article and the wiki reconcile these three stories as: Oropher and his household of Sindar (including his son Thranduil) from Doriath established the Woodland Realm in the south of Greenwood the Great in S.A. 750.

Thranduil's realm is called Eryn Lasgalen and is accessible after the fall of Dol Guldur. In addition to "Felegoth", the Halls of the Elvenking, there is the Raft-elf settlement of "Loeglond" near the Long Lake; and the haunted ruins of "Caras Tilion", the former capital in the Mountains of Mirkwood. The quests in the area involve bringing stability to the realm so that trade may resume.