"Well, here is Mirkwood! [...] Greatest of the forests of the Northern world. I hope you like the look of it."
― Gandalf in The Hobbit, "Queer Lodgings"

Mirkwood (S: Taur-nu-Fuin) or the Forest of Great Fear (S: Taur-e-Ndaedelos) was a great forest in Rhovanion. It was only known by these names in the latter part of the Third Age, having previously been called Greenwood the Great (S: Eryn Galen) and later became the Wood of Greenleaves (S: Eryn Lasgalen).

Mirkwood seems to have had much the same boundaries as it did at the end of the Third Age for most of its history. It was roughly rectangular in shape: stretching from the foothills of the Grey Mountains in the north to the North Undeep in the south, and from the east edge of the vale of Anduin to Erebor.

It was bisected by the ancient Old Forest Road. Later, when this road became unusable, a second path through the forest was made to the north. Between the two paths lay the Mountains of Mirkwood. The Forest River cut through the forest's northern end from its source in the western Grey Mountains, joined in the centre by the Enchanted River which flowed north from the Mountains of Mirkwood. 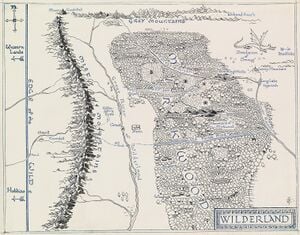 Map of Wilderland by J.R.R. Tolkien showing the northern part of Mirkwood.

South of the Old Forest road the East Bight created the Narrows of the Forest, only one hundred miles across. South and west of the narrows was the a hill called Amon Lanc.

Originally called Greenwood the Great, the forest may have once formed part of the vast primeval woodland which covered most of Middle-earth during the Years of the Trees, possibly linked to Lothlórien across the Anduin.[1] The Eldar passed through the area on their journey to Valinor and it was first populated at this time by the Nandor. Unwilling to cross the Misty Mountains, these Elves settled also in the wooded valleys of the river Anduin. They multiplied and were joined by wandering Avari, becoming known as Silvan or Wood-elves.

The Old Forest Road was constructed very early in Greenwood's history by the Longbeard Dwarves to carry traffic between their territory in the Misty Mountains to Erebor, and the Iron Hills.[2]

In around the year S.A. 750, the Sinda prince, Oropher, removed from Lindon to Greenwood where he was taken by the Silvan Elves as their lord. This forested region to the east of the Anduin is where Silvan Elves, of Nandor descent and the Avari, lived.[3] Oropher built his halls at Amon Lanc and was accepted as the leader of the Wood-elves of Greenwood, later the Elves of Mirkwood, forming the Woodland Realm.

The first millennium of the Third Age probably saw the creation of the East Bight by men living in the eastern eaves of the forest. These men may have formed part of the Kingdom of Rhovanion led by Vidugavia. Men, such as the Éothéod, and Hobbits also lived in the vale of Anduin and were likely responsible for the retreat of the forest's western border.

At the beginning of the Third Age, Thranduil replaced Oropher as king of the Woodland Realm. Probably as a result of massive losses at the Battle of Dagorlad the Silvan population of Greenwood was diminished and became mainly concentrated in the hills then known as Emyn Duir. This included the abandonment of Amon Lanc, and around the turn of the first millennium Sauron, under the guise of the 'Necromancer', returned to Middle-earth and in T.A. 1050 built a fortress there. The hill and the fortress together become known as Dol Guldur, the "Hill of Sorcery".

Around the same time as the Great Plague devastated Gondor and Eriador, the Shadow grew deep in Greenwood and evil things reappeared. Later the wise noted this coincidence and considered it a sign of Sauron's return.[4]

Indeed, by the time of Cirion (c. T.A. 2500), Dol Guldur controlled the Balchoth, a tribe of Easterlings who dwelt east of Mirkwood; often they made raids through the forest up to the Vales of Anduin, until they were all but deserted, until defeated.[5] 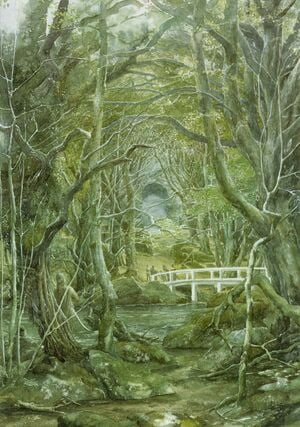 The Elvenking's Gate by Alan Lee

Sauron's arrival caused a darkening of Greenwood, and at this point it became known as Mirkwood. The children of Shelob, giant spiders, as well as bats and orcs in Dol Guldur's service occupied the forest and it became thicker, darker and covered in cobwebs.[6]

This caused the Silvan population of Mirkwood to retreat even further, residing apparently exclusively in the Elvenking's Halls at the eastern end of the Forest River. The ancient Old Forest Road was abandoned by men and Dwarves alike, with a new but seldom used path being made further from Dol Guldur and the Hobbits near the forest's eastern border migrated away.

Mirkwood remained a place of fear throughout the Third Age, though the kingdoms of Erebor and Dale flourished briefly in the time of the Kings under the Mountain. This prosperity was ended by the arrival of the Dragon Smaug who brought yet further desolation to the area north-eastern Mirkwood. Small homesteads of 'Woodmen' are also recorded as living in the western edge of the forest south of the old road in 2941.[7]

In 2850, Gandalf visited Mirkwood and discovered that the Necromancer was none other than Sauron, who had regained his powers, millennia after the Battle of Dagorlad. 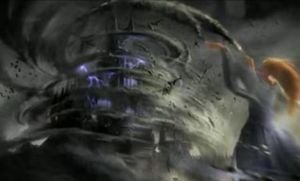 Galadriel casts down the walls of Dol Guldur

The shadow over Mirkwood was lifted, albeit temporarily, in 2941 when the White Council, prompted by the Wizard Gandalf's discovery of his true identity, drove Sauron from Dol Guldur. Gandalf also instigated the Quest of Erebor which resulted in the slaying of Smaug in the same year. The combination of these two events allowed the re-established kingdoms of Erebor and Dale, as well as the Woodland Realm and a confederacy of Woodmen led by the Beornings to flourish for a brief period.

However, only ten years after these events Sauron, now based in Mordor, sent the Witch-king of Angmar and the other Nazgûl to secretly reoccupy Dol Guldur and begin amassing an army of Orcs and Easterlings there. In 3018 these attacked the Woodland Realm, as well as Dale, Erebor and Lórien, in the opening moves of the War of the Ring.

On 19 March 3019 Thranduil repulsed Sauron's forces in a bloody battle under the trees and mounted a campaign to clear northern Mirkwood of Sauron's servants. At the same time the elves of Lórien led by Celeborn and Galadriel assaulted and destroyed Dol Guldur, and began to cleanse the southern part of the forest. Celeborn and Thranduil met in the midst of the forest on Elven New Year and formally renamed the forest Eryn Lasgalen. They then agreed to divide it between the Woodland Realm from the northern edge of the forest to the mountains, the Beornings from the mountains to the Narrows and East Lórien from the Narrows south.

Though initially they prospered as the darkness was lifted, the elves of the Wood of Greenleaves were destined either to depart for Valinor or fade into rustic forest spirits. The forest probably then ultimately fell under the dominion of Men, the descendants of the Beornings and the men of Dale.

Mirkwood is the Anglicized form of the Norse name Myrkviðr or mirkiwidu, originally hailing from Eddaic poems. Myrkviðr was the name of a "dark boundary-forest ... the great forest that divided the land of the Goths from the land of the Huns".[8] In a letter to his grandson Michael, Tolkien says that "Mirkwood is not an invention of mine", and continues to discuss the origin of the name in Old English and Old Norse writings.[9]

Projected into Old English, the term appears as Myrcwudu in Tolkien's The Lost Road, as a poem sung by Ælfwine:[10]

Sea-danes and Goths, Swedes and Northmen,
Franks and Frisians, folk of the islands,
Swordmen and Saxons, Swabes and English,
and the Langobards who long ago
beyond Myrcwudu a mighty realm
and wealth won them in the Welsh countries
where Ælfwine Eadwine's heir
in Italy was king. All that has passed.

The name Mirkwood was also used by William Morris in his novel The House of the Wolfings (1888).[11]

Mirkwood is the setting of two large chapters of the game: the first one involves rescuing of Dwarves from the Spiders, while the second covers the Halls of King Thranduil and subsequent escape.

Several missions of both good and evil campaigns take place in Mirkwood. In the Evil campaign, the Witch-King is reclaiming Dol Guldur for Sauron, while in the Good campaign Legolas and elven archers pursue the escaped Gollum.

Mirkwood is one the battlefields for the non-storyline engagements.

Mirkwood makes appearance in both Good campaign and non-storyline skirmishes, in both cases the map is very different from the one in the first game.

Southern Mirkwood and Dol Guldur are the setting of the game's second expansion, The Lord of the Rings Online: Siege of Mirkwood. In its storyline, Celeborn and Galadriel organize a military campaign against Dol Guldur while the Fellowship still resides in Lothlorien (not to be confused with the later battle during the War of the Ring). The announced goal is to saw chaos into Orc forces by destroying as many of their troops, weapons and supplies as possible, to delay an inevitable assault upon Lothlorien. The true purpose, however, is to distract the Eye of Sauron from the company departing down the shores of Anduin. An assault by the Golden Host of the Galadhrim is successful despite minor losses and after establishing multiple camps throughout southern Mirkwood arrives at the walls of the fortress itself. However, without the White Lady they do not have the means of bringing down the walls, so the Elves prepare to swiftly fall back beyond Anduin before the main forces of the Enemy arrive.

Mirkwood is the setting of one the missions in the game, where Eradan, Farin and Andriel have to rescue Radagast the Brown from a giant spider.

Mirkwood is featured in the second Hobbit film, with its scenes being shot both on set in the studio and on location.