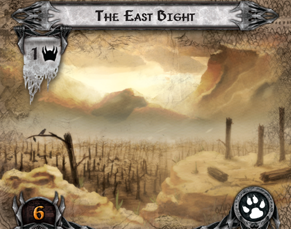 The East Bight in The Lord of the Rings: The Card Game

East Bight was the great indentation in the eastern edge of Mirkwood, a treeless region that was roughly square in shape, some fifty miles to a side, towards the southern end of the wood. The "Bight" was not a natural formation, but rather the result of generations of forestry by the Northmen who had historically occupied the lands east of the Forest, from whom the Éothéod could claim descent; the Bight actually concentrated most of their houses.[1][2] Because of the Bight, that part of Mirkwood immediately to the north of Amon Lanc was less than one hundred miles across, and so it became known as the Narrows of the Forest.[3]

Hammond and Scull have explained that the word bight (in this context) refers to "a curve or recess in a coastline or other geographical feature".[4]