The Lone-lands was an area in Eriador, or may even have been synonymous with it.

The Lone-lands was a name used by Hobbits (and possibly the Bree-landers) for the wilderness east of Bree-land. This area contained, among other features, the Weather Hills and Weathertop. Roads were considerably worse there than in the Shire, and no one dwelt there anymore by the end of the Third Age. There were many abandoned castles of Rhudaur in the hilly region, which gave it a wicked look.[1]

It is a subject of some debate whether the Lone-lands and Eriador are one and the same. Etymologies given for Eriador certainly suggest such a thing.[2][3] The two mentions of "Lone-lands" were not added until the revised, 1966 edition of The Hobbit,[4] well after the introduction of the word "Eriador" in The Fellowship of the Ring.[5] As the latter was spoken by Aragorn, who would know the Sindarin name, and the former by Bilbo, who would not (yet) know the "foreign" name, it is not inconceivable that they refer to the same land.[2] 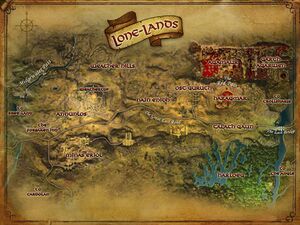 Map of the Lone-lands from The Lord of the Rings Online.

"Lone-lands" is a name given to the area south of Weathertop.

The narrator mentions the Lone-lands when Thorin and Company travel from Hobbiton to the Trollshaws.[6] Also, the game's soundtrack contains a piece called "Combat in the Lone-lands", which accompanies Bilbo's trek to the campfire of the Trolls.

The name "Lone-lands" refers explicitly to the region between Bree-land and the Trollshaws. Its boundaries are The Forsaken Inn in the far west and the Last Bridge at the far east. The game goes around the pre-existing mention of the region being uninhabited by making its people, the Eglain (Sindarin for "Foresaken"), shun existing society and avoid attention by travelers.