Ælfwine son of Éadwine son of Óswine was born an Anglo-Saxon around 869 AD, living in Britain during the 10th century. When Ælfwine was nine years old, his father sailed off with his ship Éarendel and never returned.[2]

Because of the attacks of the Danes, his mother fled with him from Somerset, where they lived, to West Wales, where she had her kindred.

He was a long way descendant of Eärendil, and had, like all of Eärendil's descendants, sea-longing in his blood.[3] He was a sailor and a minstrel.

Having grown up to full manhood and learned the Welsh language and much sea-craft he returned to Somerset to serve King Éadweard's thegn Odda in the wars. In the service of Odda he sailed and visited both Wales and Ireland many times. On his journeys he always sought tales of the sea, and thus came to hear the Irish legends of Maelduin and Saint Brendan, who both set out to sea, and came to "many islands in succession, where they encountered marvel upon marvel".[4] He heard also of a great land in the west which had been cast down. The survivors of the disaster had settled on Ireland and dwindled there; and the successors of these men all had the sea-longing in their blood, so that many sailed off west and never returned. Ælfwine thought he might be one of these descendants.

Around the year 915, in autumn, the Danes attacked Porlock. They were at first driven off and Ælfwine's company managed to capture a Danish cnearr at night. At dawn Ælfwine told his closest friend, Tréowine, he intended to sail off westward, perhaps to the country of the legendary king Sheaf. Tréowine agreed to accompany him at least as far as to Ireland. They got two other companions: Ceola of Somerset and Geraint of West Wales. 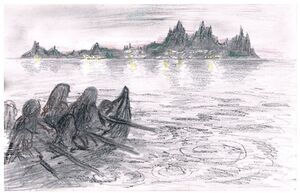 When Ælfwine woke up, he found himself lying on a beach of Tol Eressëa and a group of Elves pulling up his ship on the shore. He came to Tavrobel, where lived Pengolodh who told him the Ainulindalë,[5] and he was shown the Lammas,[6] the Quenta Silmarillion, the Golden Book,[7] the Narn i Chîn Húrin,[8] and the Annals of Aman and Beleriand.

The name Ælfwine simply means "Elf-friend" in Old English, and is the equivalent of the names Elendil and of course Elfwine. It is possibly intended as a cognate of Alboin and Alwin.

Eriol has been a background figure in Tolkien's legendarium, being a frame character to whom many texts are fictionally attributed. Ælfwine is a later version of a figure Tolkien first named as Ottor Wǽfre in The Book of Lost Tales. Ælfwine/Eriol acquired lore from the Elves of Eressea, or translated existing Elvish works into Old English. Ælfwine is described as hailing from the north-west of England and his texts are in Tolkien's favourite dialect, the Mercian, a dialect which extended as far north as the Ribble Valley in Lancashire.

Still, in some of the later writings of Tolkien written after The Lord of the Rings, Ælfwine is still referred to and it is hinted that he didn't fully abandon the idea of Ælfwine's translations, since the two frameworks (Red Book of Westmarch and Ælfwine) are not mutually exclusive.

Christopher Tolkien decided to remove all references of Ælfwine while compiling The Silmarillion since it could make the work too complex. However traces of Ælfwine's 'translations' remain, such as the archaic English 'translations' "Mickleburg" and "Hollowbold".