Elendil was the father of Isildur and Anárion, a survivor of the Downfall of Númenor, and the founder and first High King of the Realms in Exile.

Elendil was also known as Elendil the Tall, as he was the tallest of the Men who escaped the Downfall. Accounts differ as to his exact height, but he was at least seven feet tall.[1][2] 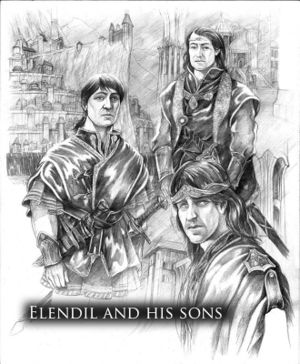 On the advice of his father, who foresaw the coming destruction of Númenor, Elendil put nine ships off the eastern coast and loaded all his people and possessions aboard them. Amandil then followed the actions of their ancestor, Eärendil and left Númenor attempting to warn the Valar of their King's folly.[3]

When the catastrophic Downfall occurred in S.A. 3319, Elendil, his sons Isildur and Anárion, and their supporters fled to Middle-earth,[4] sailing east in the nine ships. With them they took the palantíri, the "Seeing Stones" that were given to the Lords of Andúnië by the Elves of Tol Eressëa, the Sceptre of Annúminas, the Ring of Barahir, Narsil which Elendil kept as his sword, and a seedling of Nimloth, the White Tree of Númenor.[3] 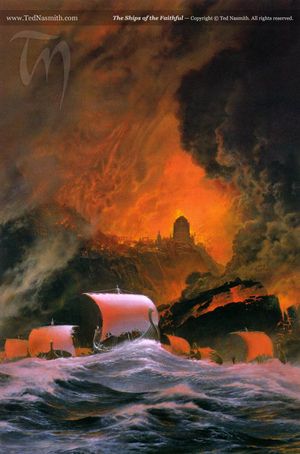 The ships became separated during the tumultuous voyage to Middle-earth; while Isildur and Anárion landed in the more southerly lands near the haven of the Faithful at Pelargir, Elendil and his people arrived at the northwest near Lindon. For this reason there were two kingdoms of the Númenóreans in exile, Arnor in the north and Gondor in the south.[5] After Elendil finally landed in Middle-earth, he proclaimed an oath in Quenya: "Et Eärello Endorenna utúlien. Sinome maruvan ar Hildinyar tenn' Ambar-metta" ("Out of the Great Sea to Middle-earth I am come. In this place will I abide, and my heirs, unto the ending of the world"). His heir and great-grandson by 39 generations Aragorn II spoke these words again when he took up the crown of Gondor as King Elessar at the beginning of the Fourth Age.[6]

Elendil founded the city of Annúminas in Arnor. His son Anárion established the city of Minas Anor in Anórien, and Isildur founded Minas Ithil in Ithilien. Elendil, however, ruled as High King. In both realms were built towers for the palantíri, with which the lords kept contact.[5]

Sauron, having lost his shape in the Downfall of Númenor, returned to Middle-earth as a shadow and a black wind over the sea. It came to Mordor, next to Gondor, where Sauron wrought a new guise.[3] In S.A. 3429 Sauron attacked, seizing Minas Ithil. Isildur fled north to his father, leaving Anárion in charge of Gondor. In response, Elendil formed an alliance with Gil-galad, the High King of the Noldor, to repel Sauron's assault.[4] It is said that Elendil bound the Last Alliance with an oath and invoked the name of Eru to witness it.[7]

The combined forces marched east to Imladris in S.A. 3431. In 3434, they passed the Misty Mountains and south together and fought in the War of the Last Alliance of Elves and Men. Elendil fought valiantly at the Battle of Dagorlad.[4] 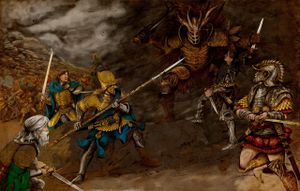 At the end of the long Siege of Barad-dûr, in the year S.A. 3441, Sauron came out to personally do battle. Gil-galad and Elendil fought Sauron and cast him down, but were both slain,[4] and Elendil's sword Narsil was broken when he fell. Isildur used the broken sword to cut the One Ring from Sauron's hand. However, despite the urgings of Elrond and Cirdan, Isildur chose not to destroy the Ring at Mount Doom and was eventually betrayed by the Ring in the Disaster of the Gladden Fields, slain by Orcs.[5]

Elendil was a great warrior, a wise king, and a heroic figure among the Dúnedain. Isildur built a hidden tomb for his father on the summit of the beacon hill that was named Amon Anwar ("hill of awe" in Sindarin). Its presence was considered great enough to hallow the entire hill, even to the Rohirrim, who called it Halifirien ("holy mountain" in Rohirric).[7]

After the founding of Rohan, the Steward Cirion moved Elendil's remains to the Hallows of Minas Tirith.[7]

Millennia after Elendil's death, Aragorn, the Heir of Isildur, invoked the name of Elendil as a battle cry during the War of the Ring.[8][9]

Elendil is Quenya for "Lover of the Stars".[10]

For the Edain it was intended to signify "Elf-friend", (Nimruzîr in Adûnaic ),[11] since they tended to confuse the Quenya element EL for both "Elf" and "star".[10]

The chieftain of the alliance against Thû (Sauron) is named Amroth both in the outline[12] and the first version of The Fall of Númenor (chapter).[13] The name Elendil is given for first time in the second version.[14]

Elendil appears in the game's first level as a non-playable character, where he has the likeness of Peter Jackson's movie counterpart.

Elendil is portrayed by Lloyd Owen in the Amazon TV Series.