The Temple was a huge, imposing structure built in Armenelos, the capital of Númenor, near the end of the Second Age. The Númenóreans used it for the worship of Melkor.

Ar-Pharazôn, the twenty-fifth King of Númenor, wished to challenge Sauron for the mastery of Middle-earth, so he travelled to Mordor with an army so great it frightened Sauron's servants, who fled. Therefore, Sauron humbled himself before Ar-Pharazôn, and was brought to Númenor as a prisoner. Once there, he soon seduced the King and corrupted the minds of most of his people, so that they turned to the worship of the Darkness and Melkor its Lord. After the Númenóreans embraced Melkor, Sauron ordered the mighty Temple to be built.

The Temple was said to be a round building that was five hundred feet tall, five hundred feet in diameter, and had walls that were fifty feet thick at the base. It was topped by a huge silver dome. This dome had a louver in the center to let out smoke from burnt offerings, and over time became black from the soot. 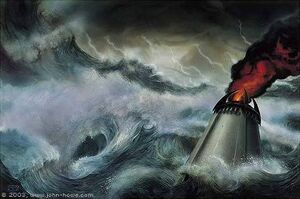 The Drowning of Anadûne by John Howe

Within this massive structure, there was a great altar and a black seat, where the High Priest (namely, Sauron) sat. The first thing to be burned on this altar was Nimloth, the White Tree of Númenor. Afterwards, the Númenóreans sacrificed humans upon the altar, most often members of the Faithful who remained undeceived by Sauron. This they did in the hope that Melkor would release them from Death, but they did not escape the fate of Men by making these bloody offerings.[1]

The Temple was destroyed in the year S.A. 3319 during the Downfall of Númenor.[2] When the sinking of the island occurred, Sauron was sitting in the black seat and laughing to himself about his success in bringing about the destruction of the Númenóreans. He and his Temple were then suddenly "taken into the abyss". However, Sauron survived the catastrophe and later returned to Mordor.[1]

It is possible J.R.R. Tolkien was inspired by The Radcliffe Camera as it has quite a few similar features with the Temple.

But Sauron caused to be built upon the hill in the midst of the city of the Númenóreans, Armenelos the Golden, a mighty temple; and it was in the form of a circle at the base, and there the walls were fifty feet in thickness, and the width of the base was five hundred feet across the centre, and the walls rose from the ground five hundred feet, and they were crowned with a mighty dome. And that dome was roofed all with silver, and rose glittering in the sun, so that the light of it could be seen afar off; but soon the light was darkened, and the silver became black. For there was an altar of fire in the midst of the temple, and in the topmost of the dome there was a louver, whence there issued a great smoke.
—Akallabêth

It was a cool clear night after a windy day. It was starry in the west, but the moon was already climbing. At B.N.C. gate Lowdham turned. The [Radcliffe] Camera looked vast and dark against the moonlit sky. Wisps of long white cloud were passing on an easterly breeze. For a moment one of them seemed to take the shape of a plume of smoke issuing from the lantern of the dome.
—Sauron Defeated, "The Notion Club Papers"

The Númenóreans also built many temples to Melkor in the Great Lands, where they sacrificed the Men of Middle-earth that they could find. For this reason, man-made structures devoted to worship of any deity had strong connotations of evil to those Men who remained devoted to Eru Ilúvatar, and they never used them in their religious observances.[source?]