(Redirected from Lords of Andúnië) 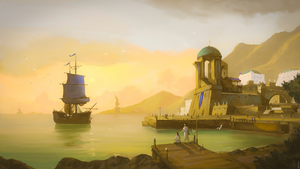 The Lord of Andúnië was the Númenórean lord who ruled the shoreland region of Andustar in western Númenor from the great city of Andúnië.[1]

Their symbol of office was a silver sceptre which was afterwards held by the Kings of Arnor.[4] The house inherited the Ring of Barahir (given by Tar-Elendil to his daughter Silmarien),[5] the original Elendilmir from Silmariën,[6] and the palantíri of Amandil (gifted by the Eldar).[7]

Tar-Elendil, the fourth King of Númenor, was the first King whose eldest child was a daughter. Silmariën, as a woman, could not receive the Sceptre of Númenor at the time because of the law of succession that then existed in the realm; she could not succeed her father as Queen of Númenor and instead her younger brother, Tar-Meneldur, took up the Sceptre.[8] Instead, Silmariën married Elatan of Andúnië and their son was Valandil, who became the first of the Lords of Andúnië.[8]

When the Shadow fell on Númenor, the Lords remained Faithful to the Valar and covertly gave aid to the other Faithful, but retained their office.[3] They could not declare their true allegiance openly, but they attempted to dissuade the Kings of Númenor from their wickedness with wiser counsel.[3]

In these dark times, Lindórië, daughter of the 14th Lord of Andúnië, wed Gimilzagar, a descendant of Tar-Calmacil. Lindórië bore a daughter, Inzilbêth, and raised her in the ways of the Faithful.

Once grown to womanhood Inzilbêth wed Ar-Gimilzôr[9] and bore him two sons, Inziladûn and Gimilkhâd. She passed her Faithful ways on to her elder son Inziladûn, who took the throne as Tar-Palantir. He was the last Faithful King of Númenor.[3]

Amandil was the last Lord of Andúnië and a dear friend of Ar-Pharazôn in their youth. He was stripped of his titles for supporting the Faithful when Sauron came to power in Númenor. The Lordship of Andúnië was not revived before the Downfall claimed Númenor.[3]

Before the Downfall, a family of Faithful related to Elendil settled in Belfalas. After the Downfall Elendil granted the title Prince to the lord of that family who had a stronghold on the high promontory of Dol Amroth. From that ancient family arose the House of Dol Amroth and its hereditary Princes.[10]

Elendil, son of Amandil, escaped Númenor before the Downfall with his sons and followers. He and his sons Isildur and Anárion founded the kingdoms of Arnor and Gondor when they arrived in Middle-earth. Though the Lordship of Andúnië would never return, the House of its Lords lived on into the Fourth Age in the distant descendants of Elendil, Aragorn and his son Eldarion.[5]