The Ring of Barahir, originally the Ring of Felagund, was an Elven artifact that was originally given by Finrod Felagund to Barahir and was kept by the Edain as an heirloom in the later Ages.

The ring had the shape of two serpents with emerald eyes, one devouring and the other supporting a crown of golden flowers, the emblem of the House of Finarfin.[1]

The Ring was fashioned in Valinor by the Noldor, and was owned by the Elven Lord Finrod. He took it to Middle-earth during the Exile of the Noldor, along with other treasures he brought from Tirion,[2] and wore it with him in Nargothrond. 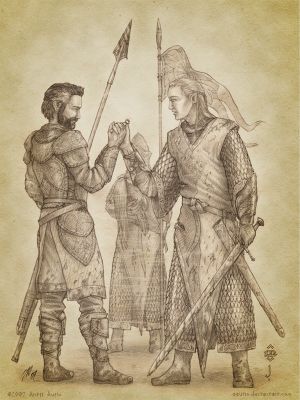 The Oath of Felagund by Antti Autio

During the Dagor Bragollach the Adan Barahir saved his life, and Finrod gave him the ring as a token of eternal friendship between Finrod and the House of Barahir.

Barahir wore the Ring for the rest of his life, until his hand, still wearing it, was taken by the leader of the Orcs who killed him, as a proof of his feat. But Beren went through great perils to avenge his father and retrieved his hand. Beren laid the hand to rest with the rest of his father's remains, but kept and wore the Ring.[1] 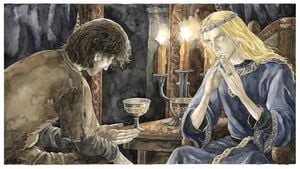 When Beren was assigned the Quest for the Silmaril, he went to Nargothrond and used it as a token to seek Finrod's help. Finrod fulfilled his pledge and even found his death in the dungeons of Minas Tirith in order to save Beren.

The Ring's fate in the following centuries is only vaguely recorded. Through Dior, his daughter Elwing and her son Elros, it found its way to Númenor. Apparently it remained an heirloom of the Kings of Númenor, until King Tar-Elendil did not give it to his heir Tar-Meneldur, but to his eldest daughter Silmariën, who was not allowed to succeed him on the throne. She in turn gave the ring to her son Valandil, first Lord of Andúnië. The Ring was handed down to the succeeding Lords of Andúnië until the last of the Faithful. Thus it survived the Downfall of Númenor when the Faithful escaped to Middle-earth.[3]

In the Third Age, the ring was again passed in direct line from Elendil, the last of the Lords of Andúnië, as an heirloom of the Kings of Arnor, and then Kings of Arthedain until the fall of Arthedain.

The last King of Arthedain, Arvedui, gave the ring to the chief of the Lossoth of Forochel, thankful for the help he received from them. Years after T.A. 1975, it was ransomed from the Snowmen by the Rangers of the North, and it was kept safe at Rivendell.[4]

Eventually, in T.A. 2952, it was given by Elrond to Aragorn son of Arathorn, when he was told of his true name and lineage, together with the shards of Narsil. In T.A. 2980, while in Lórien, Aragorn gave the ring to Arwen Undómiel, and thus they were betrothed.[5]

Nothing is said of the fate of the ring in the Fourth Age, but unless it went with Arwen to her grave at Cerin Amroth, it most likely passed to the Kings of the Reunited Kingdom, descendants of Aragorn and Arwen.

In The Lay of Leithian, the Ring belonged to Finrod (later Finarfin) and inherited by his son Inglor Felagund (later Finrod). When Beren shows the Ring in Menegroth, it is described as thus:

Proud are the words, and all there turned
to see the jewels green that burned
in Beren's ring. These Gnomes had set
as eyes of serpents twined that met
beneath a golden crown of flowers,
that one upholds and one devours:
the badge that Finrod made of yore
and Felagund his son now bore...
—Canto IV, vv. 1096-1103