The Massacre at Tarn Aeluin was an ambush that occurred in F.A. 460 when a pack of Orcs killed Barahir and his band of outlaws in their hideout by Tarn Aeluin. Of the outlaws, only Barahir's son Beren survived, as he was not present during the attack. 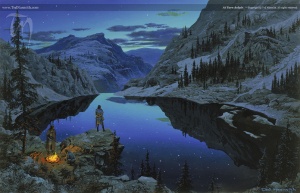 At Tarn Aeluin by Ted Nasmith

After the Dagor Bragollach, Barahir and his people refused to flee Dorthonion, and continued to defend the land. Morgoth sought to destroy them, and their numbers dwindled severely. Soon nearly all of the people of Barahir had been slain or fled, and only twelve men remained with Barahir: his son Beren, his nephews Baragund and Belegund, and nine faithful servants of his house, Radhruin, Dairuin, Dagnir, Ragnor, Gildor, Gorlim, Arthad, Urthel, Hathaldir.[1]

Morgoth continued to pursue Barahir and his companions, and coming to the wild lands around Tarn Aeluin, Barahir and his men took refuge there. Unable to discover their whereabouts, Morgoth ordered Sauron to find and destroy the outlaws.[2]

Gorlim the Unhappy, who was among the outlaws of Barahir, had been wedded to Eilinel. Returning from the war, however, he had found their house empty and his wife gone. Clinging to hope that she was not dead, he would occasionally return in secret to their house. On one such trip, he thought he caught a glimpse of her through the window. But before he could go to her, the light was blown out, and he was captured by Sauron’s hunters. Sauron promised Gorlim that he would be reunited with his wife if he revealed the hiding place of Barahir. When Gorlim at last gave in and told all that Sauron wished, Sauron mocked him and revealed his trickery. For Eilinel was dead, and Gorlim had only seen a phantom of her designed to trick him. Sauron then slew Gorlim, thus reuniting him with his wife.[2]

Beren, who had been sent away on an errand to spy on the Enemy, dreamt one night of carrion crows, sitting in the trees beside a mere with blood on their beaks. In that same dream, Gorlim came to him as a wraith, telling Beren of his treachery and warning him of Barahir’s danger. Beren awoke, and set off at once, but he would arrive too late.[2]

Having learned where Barahir and his men were hiding, Morgoth sent Orcs to destroy them. The orcs arrived at the outlaw's lair before dawn. They ambushed the men, who were not expecting an attack, and slew them all. The captain of the orcs cut off the hand of Barahir, which still bore the ring that Finrod Felagund had given him.[2]

Beren arrived at the lair of the outlaws to find his companions dead, and his dream in part true: carrion-birds sat in the trees beside the lake, croaking in mockery. Beren buried his father and raised a cairn over him, upon which he swore an oath of vengeance. He then set out in pursuit of the orcs who had slain his companions. He discovered their camp at Rivil's Well, where the captain of the Orcs was holding up Barahir’s hand and boasting. Beren leapt out from his hiding place, and slaying the captain took the hand of Barahir with the ring and fled. For several years afterwards, Beren wandered through Dorthonion as a lone outlaw, accomplishing deeds of great daring and evading capture.[2]