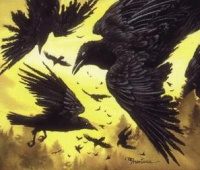 Crows are black omnivorous birds sometimes associated with battles due to their taste for carrion.

The crows encountered by Bilbo Baggins and the Dwarves during the quest to Erebor in T.A. 2941[1] were mostly harmless. During the scouting expedition to the Front Gate of the Lonely Mountain the crows were considered "ominous" and Balin distrusted them,[2] though later he called them merely "nasty suspicious-looking creatures at that, and rude as well".[3]

The most feared variety in the Westlands of Middle-earth was the large type known as crebain. On 8 January 3019 the Fellowship entered Hollin[4] and were spied upon by these large crows from Fangorn and Dunland.[5] The Rohirrim were aware that Saruman made use of crebain; on 30 February[4] Éomer told Aragorn that Saruman's "birds of ill omen are abroad in the sky".[6] Crows may actually just be another name for Ravens as they looked and acted exactly the same.

Adûnaic also had its own terms for a crow, specifically khô in "common" gender singular ("crow", as a species/creature), the plural khôi ("crows"), and the dual (pair-plural) khôwat ("a pair of crows"). Tolkien's notes on Adûnaic vocabulary and grammar also indicate that the more archaic forms of the term were likely khaw, later khâw, eventually evolving into khâu (with the Adûnaic diphtong âu), while the plural of these older forms would apparently be khâwî(m). However, both khâu and khâwî(m) would likely be declensions in the subjective case of the noun, rather than in the nominative case. The objective case of the noun would be khôwu. [10] [11] [12]

In J.R.R. Tolkien's plot notes for the second phase of writing The Hobbit, there was no distinction between crows and ravens as ominous birds.[13] When the scouting party went to view the Front Gate Balin did not like the ravens nearby, stating that they looked "like spies of evil".[14] However, when the Company needed to learn of the death of Smaug Tolkien "rehabilitated" the ravens, making them friendly to the Dwarves, and replaced all negative raven-references with crows.[15]