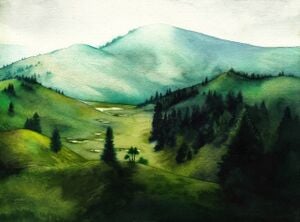 Then over fen and field and mountain
he folowed, till beside a fountain
upgushing hot from fires below
he found the slayers and his foe. . .
- The Lay of Leithian[1]

"[Beren] swore. . . an oath of vengeance. First therefore he pursued the Orcs that had slain his father and his kinsmen, and he found their camp by night at Rivil's Well. . ."
― The Silmarillion, Of Beren and Lúthien

Rivil's Well was the spring of the river Rivil, flowing from Dorthonion above the Fen of Serech.

It was here where an Orc-band, after killing Barahir's Outlaw Band, camped. Their captain boasted about his deeds, holding the severed hand of Barahir, still with his Ring on it. Beren, having followed their traces, avenged his father by slaying the captain, while recapturing his father's hand. He fled leaving the Orcs aimless and dismayed.[2]