"They were eager of mind, cunning-handed, swift in understanding, long in memory, and they were moved sooner to pity than to laughter."
― Quenta Silmarillion, "Of the Coming of Men into the West"

The House of Bëor, also known as the First House of the Edain, was the name given to the first of the three Houses of the Edain to cross the Ered Luin into Beleriand after travelling west, driven forth by the terrors wrought by Morgoth in the east. From the House of Bëor would come many famous lords and heroes, most notably Beren Erchamion who claimed a Silmaril from Morgoth's Iron Crown.

The followers of Bëor and his descendants would become the Bëorians, Men of Dorthonion, and the People of Bëor.

The Men of the House of Bëor descended from the tribes of Men who abandoned Hildórien for the West. They were at war with the Men who fell under the Shadow, and were pursued by them.[1] They followed a road around northern Rhûn where they met some Dwarves.[2] At the shores of the Sea of Rhûn a small part was separated, which would later become the House of Bëor. The Greater Folk, the ancestors of the House of Marach, came later in the north-east woods near the shores. They crafted boats and could sail the inland Sea, and seemed to had been related to the ancestors of the Northmen.[3]

The Folk of Beor didn't have beasts of burden so they were hardened by toilsome journeys carrying great loads. A group of 2000 poor and ill-equipped adult men found a way to pass the Blue Mountains.[1]

Under the leadership of Balan (later called Bëor), they crossed over the mountains into Thargelion in F.A. 310 and there were discovered by the Noldorin King Finrod Felagund, eldest son of Finarfin, thus they were the first men to encounter one of the Eldar. Finrod befriended the House of Bëor (the First House of the Edain) and persuaded Thingol, overlord of Beleriand to grant the new arrivals lands which to inhabit. Thingol gave to them (and the other two Edain Houses that followed) land in the realm of the Noldorin Elf-lords Amrod and Amras, the youngest sons of Fëanor, of which this land was thereafter known as Estolad, the Encampment. In 402, there was fighting in the northern marches of Beleriand where the Orcs attempted to break through the Pass of Aglon. There Maedhros and Maglor, the eldest sons of Fëanor, threw back the invaders with the aid of the younger sons of Finarfin, Angrod and Aegnor their half-cousins; and Bëor, after entering into the service of the king of Nargothrond Finrod, was mostly with the Elf-lords of the House of Finarfin, Angrod and Aegnor, the younger brothers of King Finrod, was the first among Men to draw swords on behalf of the Eldar of Beleriand.[4]

In the reign of Boromir as Lord of the House of Bëor, great grandson of Bëor, the Bëorians were granted Ladros in Dorthonion (ruled by Finrod's brothers Angrod and Aegnor) as a feifdom of their own by the House of Finarfin which they inhabited until the Dagor Bragollach in 455 when Dorthonion and Ladros included were swept away by Morgoth's offensive and Boromir's grandson Bregolas, the third Lord of Ladros was slain, leaving the leadership of the ruined house to his brother Barahir.

Barahir did what he could to ensure the House's survival, sending the women and children to safety under the leadership of his wife Emeldir. They went to the forest of Brethil where some merged with the Haladin, but others (including Rían and Morwen) continued on to Dor-lómin and joined with the people of Galdor. Meanwhile Barahir remained in Dorthonion with his son Beren, Bregolas' sons Baragund and Belegund, and a dwindling company of men. Pressed by Sauron from Tol-in-Gaurhoth this company was eventually betrayed by one of their members Gorlim the Unhappy, revealing Barahir's hideout at Tarn Aeluin. All the company were destroyed save Beren who was away scouting when the attack happened. None the less, from that point on the House of Bëor ceased to be an independent entity and its people joined the surviving Houses of Men. 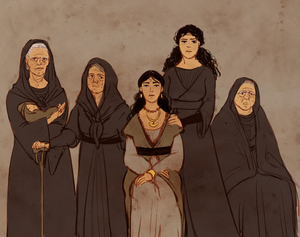 The Bëorians were noted as being very akin to the Noldor in their appearance. They had dark or brown hair with grey or brown eyes, and some among them were fair-haired; their skin ranged from fair to even swarthy. Most were broad and of stocky build; those as tall as those of the Folk of Hador were rare.[5][1]:308

They were eager, smart and quick in learning, cunning-handed and long in memory. They were moved sooner to pity than to laughter.[5] They are also described to be more steadfast even than the Folk of Hador, fortituously enduring hardships and sorrows, slow to cry and to laugh.[1]

Many of those descended from Bëorian stock had the traits most akin to those of the Noldor, such as Túrin Turambar whose mother Morwen Eledhwen was Bëorian. He was mistaken for one of the Noldor, inspiring his name Adanedhel, meaning 'Man-elf'.

The Sindarin name for "House of Bëor" was Bar Bëora.[6]

Showing the descendants of Bëor, the First House of the Edain. All information in the tree is from The War of the Jewels, (i) The House of Bëor,[6] unless otherwise specified. The figures after the names are births and deaths where recorded (when only one figure is shown, marked as 'b.', it indicates a date of birth). All dates shown are from the First Age; when no dates are shown then that person was not of the House of Bëor. A dagger symbol '†' signifies those who did not die of old age. A name preceded by '#*' indicates a ruler of the house, with the number specifying the order. Names in italics indicate women.

In the tree the following colors are used: White - House of Bëor, Blue - House of Haleth, Yellow - House of Hador, Green - Elves, Turquoise - Half-elven, and Red - Later Houses of Men.