"At the first rising of the Sun the Younger Children of Ilúvatar awoke in the land of Hildórien in the eastward regions of Middle-earth."
― Quenta Silmarillion, "Of Men"

Hildórien was the land in the far east of Middle-earth in which the first Men or Hildor awoke at the beginning of the First Age.[1][2]

It was said among the Elves that Morgoth went there and put a darkness in the hearts of the Men.[3] Some Men, who were at war with those who fell under the Shadow, fled Hildórien seeking the Light of the West.[4]

The Silmarillion appendix confirms that Hildórien is of the same root as the word Hildor.[5] It can be therefore understood as Quenya hildor + -ien, therefore "Land of the Followers".

Hildorien was far to the east of Cuiviénen, where the first Elves awoke.[6] It may have been located on Middle-earth's shore with the East Sea and surrounded by the Mountains of the Wind.[7] 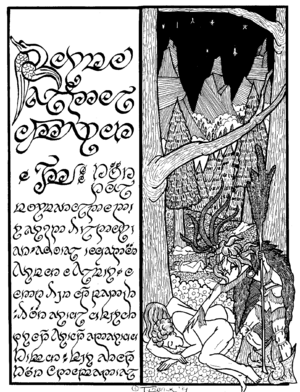 "Nuin, Father of Speech" by Tom Loback. Art for the back cover of Parma Eldalamberon 10.

In The Book of Lost Tales, Men awoke in a hidden valley called Murmenalda, the Vale of Sleep or Slumbrous Dale. It was enclosed by a wall of encircling mountains, east of Palisor, described as "hallowed" and full of sweet fragrances and odours, and songs of nightingales, its beauty being comparable to Valinor. It was full of sleeping figures.

It was discovered by the Dark Elf Nuin after finding a passage through the mountain wall. Nuin almost swooned at its loveliness and was puzzled by the Sleepers. Despite Tû's warnings, Nuin visited it often to watch the Sleepers until, overcome with curiosity, he woke the first pair of them.[8]