The Nauglamír or Necklace of the Dwarves was a famed piece of jewellery; combined with the craft of Dwarves and gems from Valinor it was of great grace and beauty which it gave to its wearer. Despite being loaded with gems, it sat lightly on the neck.[1]

It bore the Silmaril rescued by Beren from the Iron Crown, and it became jewellery more beautiful than anything ever before seen in Arda. But because of the Silmaril it was coveted by the Sons of Fëanor and entangled in the Doom of the Noldor. 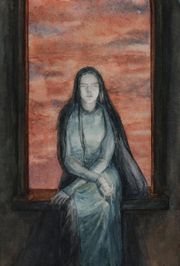 Nauglafring or Fring na Nauglithon is Gnomish for "Necklace of the Dwarves", from naugl- ("dwarf") + fring ("carcanet, necklace").[10]