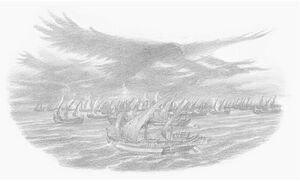 The Eagles and the Army by Alan Lee

The Great Armament was the armada of warships and military forces prepared by the last King of Númenor, Ar-Pharazôn, for the purpose of invading the land of Aman to challenge the Lords of the West (Valar).

In S.A. 3261, Ar-Pharazôn invaded Middle-earth; by the following year Sauron submitted to him and was taken as prisoner to Númenor. Over the course of the next 48 years Sauron gradually seduced and corrupted the King and the majority of the Númenóreans. Feeling the coming of death, in S.A. 3310, Ar-Pharazôn initiated the construction of the Great Armament.[1]

When preparation of the Armament became apparent, Amandil became dismayed and attempted to sail into the West to beseech the Valar for mercy and deliverance from Sauron. His mission failed and he was never heard from again.

For nine years Ar-Pharazôn amassed his strength in the havens of western Númenor while Elendil, Amandil's son gathered a small fleet of ships in the east that held the wives and children of the Faithful as well as their heirlooms and a store of goods. In secret the ship of Isildur, Elendil's son, also held a scion of Nimloth, the white tree.

As the Armament proceeded, omens appeared from the West – at first great clouds appeared in the shape of vast eagles, spreading darkness upon the land. As men hardened their hearts the clouds issued lightning that slew men, with one bolt smiting the dome of the Temple that Sauron had caused to be built in the city of Armenelos. Earthquakes shook Númenor and smoke poured from the summit of the Meneltarma, yet Ar-Pharazôn pushed all the more to complete his Armament.[2]

Finally, in S.A. 3319,[1] the King boarded his flagship Alcarondas and led the armada into the West. So vast was the Númenórean fleet that it surrounded all of Tol Eressëa. Coming upon the silent shores of Valinor, Ar-Pharazôn almost wavered but his pride won out - he landed and claimed the land for his own. Manwë then called upon Ilúvatar who put forth his power: The world was changed with a vast chasm rending the sea between Númenor and the Deathless Lands. The ships of the Great Armament were swallowed into the abyss while Ar-Pharazôn and his followers upon the shore were buried under falling hills.[2]