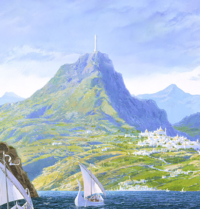 Detail from White Ships from Valinor by Ted Nasmith

Oromet was a hill near Andúnië and the western shores of Númenor. It was here that the King of Númenor, Tar-Minastir (whose name meant "Tower Watcher"), built a high tower where he could spend many days gazing westward.[1] Well over a thousand years later Tar-Palantir often visited the tower upon Oromet in the vain hope of seeing Tol Eressëa or at least some ship coming from the west.[2]

The name is obviously Quenya[3][4] and includes the Elvish root for "mountain".[5]

The meaning is obscure[4] but it has been suggested that the name means "last mountain".[3] Cf. the Elvish root MET "end".[6]