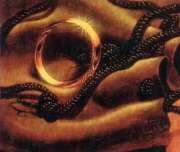 Gold refers to both a valuable mineral in Middle-earth and golden colour or golden light.

Gold was present in the deeps of Arda since its creation and Aulë, the great smith was the first to make use of it. Afterwards, it was to be used by all speaking peoples of earth particularly the Dwarves who mastered it and by the Noldor.

One of the Seven Gates of Gondolin was the Gate of Gold.

Although valuable, the metal was not nearly as valuable as mithril. Gimli stated that when the Dwarves mined mithril in Moria it was worth ten times the value of gold and that after the coming of Durin's Bane mithril was beyond price).[1] The Teleri also prized silver (which they called telpe) above gold.[2]

The One Ring was made of gold,[3] as was Vilya, the Elven Ring of Elrond.[4] The treasure of Smaug also contained gold, wrought and unwrought.[5]

In The Book of Lost Tales a portion of gold was used in the creation of Tilkal, to construct Angainor.[6]

Gold (Mal) is valued by the Dwarves above all other metals, save mithril. Elven smiths mix it with other metals to make strong alloys.[8]