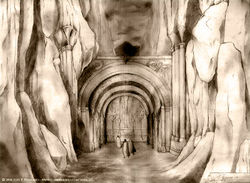 The Gate of Wood by Luis F. Bejarano

The Seven Gates of Gondolin were seven mighty gates guarding the Orfalch Echor.

They were built by King Turgon to protect Gondolin from invasion. It was through these that Tuor and Voronwë passed to get into Tumladen.[1] However, it was not through these that the host of Morgoth came in the Fall of Gondolin, as after hearing Ulmo's warning, Turgon closed the doors.[2]

The Seven Gates had a division of guards known as the Dark Guard[3] led by their captain, Elemmakil. Each gate had their own unit of the Dark Guard. The gates are listed below, from the end of the Orfalch furthest from Gondolin to the one bordering Tumladen.