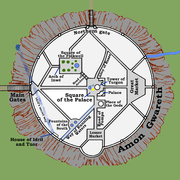 Map of Gondolin showing the Lesser Market on the south side

The Lesser Market was a market in Gondolin, according to the early version of the legendarium in The Book of Lost Tales.

It was in the southern part of the city, and Salgant dwelt near its square. During the Fall of Gondolin, Turgon sent Salgant to the Great Market to reinforce Glorfindel and the house of the Golden Flower, but being deep in his cowardice, Salgant lied to his company, the host of the Harp, and took them to the Lesser Market. There his men fretted and rebelled from his orders, and came back to the king's halls in time to save Glorfindel.[1]

Retrieved from "https://tolkiengateway.net/wiki/Lesser_Market"
Categories: Gondolin | Locations in The Book of Lost Tales