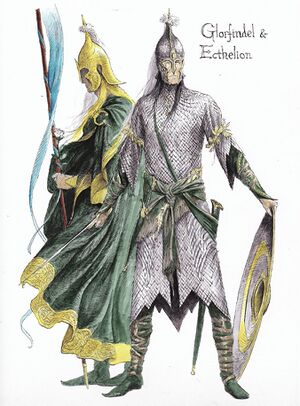 The most detailed text about Ecthelion and his deeds during the Fall of Gondolin is the chapter "The Fall of Gondolin", in The Book of Lost Tales Part Two. There it is told that he is the lord of the house of the Fountain, one of the twelve houses of the Gondothlim. Its people found delight in diamonds and the silver of their arrays was most beautiful to the sight.[4]:173 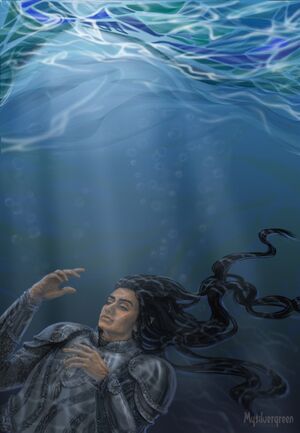 During the siege of the city, Ecthelion led his folk into battle accompanied by the music of their flutes, and great were the damages caused to the enemy by their long, bright swords.[4]:173 He and his forces made their entrance from the South part of the city, after previously being held in reserve. So terrible was his voice when commanding the drawing of the swords and the killings which followed, that his name became a terror among the enemy and a war-cry to the Eldar. Valiantly fighting side by side with Tuor and his house of the Wing, they drove away the orcs until the gate was almost regained. It is said that Ecthelion and his house of the Fountain slew more orcs than had ever been slain, in all the battles of elves and orcs combined. Ecthelion killed three Balrogs and his sword did "hurt to their fire". However, dragons reinforced Melko's army. Outnumbered, they had to retreat. When doing so, Ecthelion's left arm was wounded and his shield fell to earth. Tuor carried him away as they joined the remaining leaders in the Square of the King.[4]:180-182

In that place the great Fountain of the King stood and Ecthelion regained his strength by drinking from it. As seven dragons lead the enemy's forces towards the Square, the remaining army of Gondolin began retreat. All but Ecthelion, who remained near the fountain in a stand which was remembered as the most valiant "in all the songs or in any tale". There Gothmog lord of Balrogs beated down Egalmoth, but Ecthelion came inbetween despite being pale as steel. During the duel, Ecthelion was wounded in the hand and lost his sword. Gothmog then was about to deliver a blow with his whip when Ecthelion jumped and drove the spike of his helmet into Gothmog's body. Twining his legs with the enemy's, both fell into the Fountain of the King. Gothmog died there with Ecthelion, sank because of his steel armor.[4]:183-184