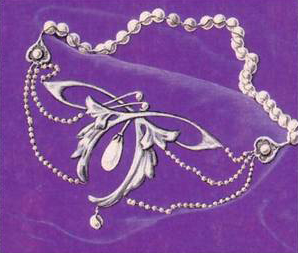 Silver is a highly reflective grey or white metal referenced often by Tolkien in his legendarium.

One of the Two Trees, Telperion, was silver in colour if not in material.[1] Mithril is said to highly resemble silver.[2]

The Falmari prized silver above gold, and their skill as silversmiths was esteemed even by the Noldor.[3]

Several examples of objects made of silver are the crown of Elu Thingol of Doriath, the silver harp of the House of the Harp in Gondolin, the Tree of Gondor, according to Bilbo Baggins the habergeon of Eärendil (which, if true, suggests that silver was stronger in Middle-earth than in the real world), and one of the gates of Gondolin. As well, it was often referenced in titles and names (for example Celeborn, silver-tree, Celebrimbor, silver-hand, and Celebrindal, silver-foot).

The Dwarves of Moria and other holds export silver to the Elves. Especially the Noldor are said to covet silver.[4]