"But fairer than all the wonders of Gondolin was Idril, Turgon's daughter, she that was called Celebrindal, the Silver-foot, whose hair was as the gold of Laurelin before the coming of Melkor."
― Quenta Silmarillion, "Of the Noldor in Beleriand"

Idril Celebrindal was the daughter of King Turgon of Gondolin, the wife of Tuor and the mother of Eärendil the Mariner.

Of the Noldor who returned to Middle-earth documented to have Vanyarin ancestry, Idril has the most, being five-eighths Vanyarin by ancestry. Her Vanyarin mother Elenwë died during the crossing at Helcaraxë, and so did not step foot in Middle-earth.

Idril Celebrindal was the only child of Turgon. She participated in the Flight of the Noldor, and had to cross the Helcaraxë with the host of Fingolfin. She and her mother Elenwë fell into the bitter waters, and Turgon risked his life to save them. But he only could save Idril, and her mother was covered in fallen ice.[1]

Together with Orodreth and Celebrimbor, she was one of the three Noldor in the third generation to come into exile. She lived in Vinyamar during the beginning of the First Age, and she moved with her people to the Hidden City of Gondolin between the years 64 and 116.[2] In the city, the smithcraft Enerdhil made the famous gem Elessar, and he gave it to Idril, who wore it upon her breast.[3]

Maeglin, the son of Aredhel, Turgon's sister, became interested on Idril even before coming to the city, and when he saw her for the first time "she seemed to him as the sun from which all the King's hall drew its light." She was the only one who could pierce into his mind, and knowing his thought of her she loved him the less, as they were too closely related.[4]

When Tuor son of Huor was received in Gondolin, Idril sat on the left of her father. And while living there, the heart of Idril was turned to Tuor, and his to her. Because Turgon had grown to love Tuor as a son (as he had his father before), and remembering the last words of Huor, he allowed Idril and Tuor to wed, thus bringing about the second union of Elves and Men, after Beren and Lúthien.[5] From them Eärendil Half-elven was born, and she gave him the mother-name Ardamírë, that foretold his destiny.[6]

Years later, Morgoth had increased his efforts to find the city, "but Idril Celebrindal was wise and farseeing, and her heart misgave her, and foreboding crept upon her spirit as a cloud." Therefore, Idril let prepare a secret way, and she contrived that this work was not known to Maeglin. Thus, when the Fall of Gondolin began, she and Tuor were able to lead many survivors out of the city and save their lives.[5]

After the fall of Gondolin, Idril and Tuor became leaders of the exiles at the Havens of Sirion, where they also received Elwing, daughter of Dior, son of Beren and Lúthien.

When Tuor grew old, he departed in his ship Eärrámë for the West, and Idril went with him. Before leaving, she gave the Elessar to her son, saying: "The Elessar I leave with thee, for there are grievous hurts to Middle-earth which thou maybe shalt heal."[3] It is believed by the Elves and Dúnedain that Idril and Tuor arrived in Valinor, and it is said that Tuor became reckoned in the kindred of the Elves, so that they both live in Valinor.[5]

The Sindarin name Idril is not glossed, but the form of her Quenya name Itarillë (or Itarildë) means "Sparkling Brilliance".[7]

In The Book of Lost Tales, Idril meant "Beloved" in Gnomish, but Elves often called her Idhril, or in Qenya Irildë, which meant "mortal maiden", because she married Tuor.[10] Her after name "Silver Feet" was Tal-Celeb in Gnomish, and Taltelepta in Qenya.[11]

Idril's fate was woven with Tuor's since she first saw him from a high window the day he came to the city. Tuor also loved her in secret for many years until his heart was full, and Turgon did not oppose to their union. This was the first marriage between a Man and an Elf, and it was made in Gar Ainion to the great joy of the Gondothlim, except Meglin.[12]:164

Idril had great skill to see the hearts of Elves and Men, and a special power to foresee the future. Thus, one year after the birth of Eärendel, she told Tuor of a dream she had: Meglin threw their son into a furnace and he wanted to thrust them in too. Therefore, she asked Tuor to begin the building of a secret way.[12]:167-168 Seven years later, Idril became taciturn, and prophesied to Tuor that he would have to make a choice, and that the time was near. Her husband could not understand her, but obeyed her counsels.[12]:170-171 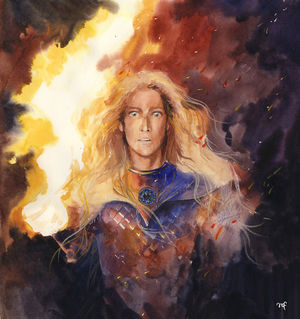 When the Fall of Gondolin began, she arrayed herself in mail, and gave Eärendel a tiny mail coat she had ordered in secret.[12]:174 But her house was attacked by the folk of the Mole, and Meglin tried to throw Eärendel from the walls while dragging her by the hair to make her see it. But Eärendel resisted and "she fought, alone as she was, like a tigress for all her beauty and slenderness". Then came Tuor and his folk of the Wing, saving them. Her husband left her there with Voronwë and other men, and went to battle.[12]:177-178

During the siege of the city, Idril was in the door of her house and sent most of her guard down the secret tunnel with Eärendel. But she refused to leave without her lord. Meanwhile, she gathered women and wanderers, showing them the secret tunnel; and her men helped her fighting marauders, but they might not dissuade her from bearing a sword. However, a band of enemies took over the house, and Idril became distraught by grief and fatigue, and running away from the house she arrived to Gar Ainion. There Tuor found her like in the day of their wedding, but she could not recognize him: she was out of her mind, watching the fall of her father. Then Tuor took her and went down the secret tunnel. When the Exiles of Gondolin reached Tumladin, she spoke against those who wanted to march to the Way of Escape, explaining it was no longer protected, "for what magic stands if Gondolin be fallen?"[12]:186-189 After the survivors were saved by the Eagles, Idril and her people wore an eagle as emblem.[12]:193

Tolkien did not finish The Book of Lost Tales, so the end of Idril and Tuor is very different in each outline. Like in the published Silmarillion, in all versions Tuor sails west after falling into age. In the most repeated version, Tuor sails without Idril, who grieves him with Eärendel; later she vanishes (sailing at night).[13]:253-254 In another version, Idril swam after her husband.[13]:260 In a separate note, Tolkien considered her death,[13]:263 but this contradicts the last one he chose, in which "Tuor and Idril some say sail now in Swanwing and may be seen going swift down the wind at down and dusk".[13]:255