Angmar ('Iron Home', Sindarin) was a region and kingdom founded about Third Age 1300 in the far north of the Misty Mountains by the evil Lord of the Ringwraiths, who became known as the "Witch-king of Angmar". Since the Witch-king was a vassal of the Dark Lord Sauron, it is presumed that Angmar's wars against the successor kingdoms of Arnor were done at Sauron's bidding.

The capital of Angmar was Carn Dûm. Here it was said that an evil race of men, possibly related to the Easterlings of the First Age, lived.

About T.A. 1300 Sauron's shadow became stronger and evil things multiplied, heralded by the reappearance of the Nazgûl.[1] The Witch-King of Angmar, the lord of the Nazgûl, was conducted by Sauron to gather evil men and creatures, and founded the realm in the lands north of the Ettenmoors and between the Mountains of Angmar and the Grey Mountains. Their sole purpose was destroying the fading Dúnedain of the North.

Soon after Angmar was founded, it waged war against the divided Dúnedain realms of Arthedain, Cardolan and Rhudaur. Rhudaur was the first kingdom to fall. Already in Rhudaur the Dúnedain were growing few, and an evil Hillman seized the kingship. This chieftain allied with Angmar, and they exterminated the few remaining Dúnedain in Rhudaur.

Now under the Witch-King's control, the forces of Rhudaur and Angmar invaded Arthedain, killing Argeleb I, the king of Arthedain. However, with the aid of the armies of Cardolan, Arthedain managed to maintain a line of defence along the Weather Hills.

In T.A. 1409 Angmar attacked Rivendell and Cardolan, besieging Rivendell and destroying all of Cardolan except for remnants of the Dúnedain, who held out at the Barrow-downs and retreated into Minhiriath. The last prince of Cardolan was slain and buried in the Barrow-downs that year.[2] Since Rhudaur had fallen under Angmar's control, Arthedain was left without any allies except for Lindon. Despite this, Arthedain struggled on for another 500 years. The last people of Cardolan died in the Great Plague, allowing Angmar to send Barrow-wights to infest the Barrow-downs.

In T.A. 1974 Angmar amassed its forces and launched a final assault on Arthedain. Angmar took Arthedain's capital Fornost, destroying the last kingdom of the Dúnedain. The Witch-King hunted the King Arvedui into the north, where Arvedui was attempting to hold off the armies of Angmar. When he was at the end of his resources, Arvedui fled to the bay of Forochel. The elves of Lindon sent a ship to rescue Arvedui, but it sank in the bay of Forochel, killing the last king of Arthedain.

A year later, Prince Eärnur of Gondor arrived to aid Arthedain, but he was too late. His army utterly defeated the forces of Angmar in the Battle of Fornost, but the Witch-king was not slain. He escaped and fled to Mordor, but his kingdom of Angmar was no more.[3]

The territory of Angmar which extended east of the Misty Mountains was subsequently overrun by the Éothéod, ancestors of the Rohirrim.

Angmar seems to be a corrupted Sindarin or Quenya name.[4] It means "Iron Home".[5] It is a compound of anga ("iron") and mbar ("habitation"). The name would be angbar in pure Sindarin and angamar in pure Quenya.[4]

Angmar is a playable faction in the game, featuring mostly noncanon heroes and units. Moreover, in the campaign section of the game Angmar is besieged in Carn Dum by Glorfindel and his Elves, however he wins the siege and destroys Arnor and Fornost. 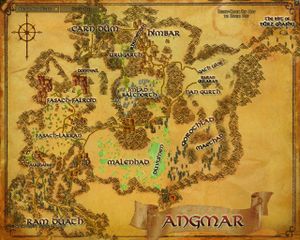 Map of Angmar from The Lord of the Rings Online

Angmar was not completely destroyed after the Battle of Fornost. Rather, the Witch-King changed Eärnur into a wraith to watch over his kingdom until it could rise once more. By the time of the War of the Ring the kingdom of Angmar was once again strong enough to threaten Eriador. The Men of Angmar were of two distinct cultures. The ruling class of Carn Dûm consisted of the sorcerous Angmarim, who had Black Númenórean blood and were staunch followers of Sauron and his servants. The others were the tribes of Hill-men, native folk who continued their old traditions. One Hill-man clan, the Trév Gállorg, opposed the False King and was friendly to the Free peoples. Their rivals were the Angmarim-aligned Trév Duvárdain. Angmar is also home to many evil creatures such as wargs, drakes, spiders, Merrevail, and Gertheryg. Four tribes of orcs, the Blogmal, the Krahjarn, the Ongbǘrz, and the Tarkrîp, originate from Angmar.

The region was accessible from the North Downs by traveling through the Ram Dúath, a range of winding canyons in the south-west of Angmar. Within Ram Dúath were camps of the Angmarim and orcs marching to war, and also the peaceful Earth-kin village Lehmä-koti. North of the Ram Dúath were the grey hills of Fasach-Larran and Fasach-Falroid, where the Hill-men of Angmar dwelt. At the westernmost exit of the Ram Dúath was the Trév Gállorg village of Aughaire. The hostile Trév Duvárdain inhabited towns and camps in the north.

To the east of the hills was the great brimstone swamp of Malenhad. The dread Watching-stones of the Rammas Deluon formed a barrier of deadly fear down the middle of Malenhad, effectively separating the western half of Angmar from the eastern half. The shallow sulfur lake Duvuinen lay in the east of Malenhad. Hidden in a cavern to the south of the lake was the Dwarf-outpost Gabilshathûr. In the south-east of Angmar beyond the lake were the valleys of Gorothlad, home to orcs, trolls, and other evil creatures. Gorothlad contained several camps for Angmar's growing orc army as well as the arena of Maethad. North of Gorothlad was the rocky basin Nan Gurth, in the center of which stood Barad Gúlaran and its ring of eight lesser towers.

West of Nan Gurth was Imlad Balchorth, a valley full of tombs and poisoned water, haunted by many wights and fell-spirits. In the north-east of Nan Gurth was Gath Uior, a pass to the Rift of Nûrz Ghâshu in the far north-east of Angmar near to the northernmost of the Misty Mountains. Deep underground within the Rift the Balrog Thaurlach was kept imprisoned after his defeat by the Blue Wizards. Fire-orcs and nameless things also dwelt there, though they were opposed by a mysterious race of fire giants known as the Eldgang.

North-west of Nan Gurth and north-east of Imlad Balchorth was Himbar, an ashen, spider-infested land among crags of black rock like obsidian. Up a path into the rock walls that bordered Himbar in the east was the secret Ranger refuge of Gath Forthnír. In the west of Himbar was the Angmarim town Rhunendin, and beyond that was a long gated pass to the capital city of Carn Dûm. In the south-west of the capital was a narrow, winding pass, guarded by Watching-stones, that connected to the hill-man towns in the north of Fasach-Falroid. The host of Angmar marched to the southern lands along a main road that led south from Rhunendin between Imlad Balchorth and Nan Gurth, then turned west to pass north of Malenhad. Beyond Malenhad the road turned south to enter the Ram Dǘath.

Angmar and its war with Arnor are mentioned by Galadriel in the White Council. Following the destruction of Angmar the Men of the North took the body of the Witch-King and sealed him in High Fells of Rhudaur.

Gandalf tells Thranduil and Bard that Sauron's final goal was to conquer the Lonely Mountain due to its strategic position. This would enable Sauron to restore Angmar and gain dominance over the north of Middle-earth.

Following the Kingdom's destruction, only a few of the Witch King's servants gathered in the lands that once stood as his domain, with the descendants of those few gathering in the old fortresses. They waited patiently and diligently for their master's return, but let the very hillmen that they once ruled over colonize the territories of Rhuduar, which they claimed as their own. As the ring once again calls for his master, Sauron sends his Nazgul to Eriador, where the Witch-King takes the remnants of his Kingdom and demands his servants to go forth and wage war once again in the name of the Iron Crown.

A new overlord is selected by the Witch King to unite the savage lands of Rhudaur, call forth the orcish denizens of Mount Gram, and muster a great host to destroy the Free Peoples and conquer their lands in the name of Sauron, knowing that Gondor will not go to the aid of the North as they are focusing their efforts on Mordor and their Easterling vassels. Only when Eriador has been dominated by the Iron Crown may the Kingdom of Angmar truly rise from the ashes and claim the glory that it was denied centuries beforehand.