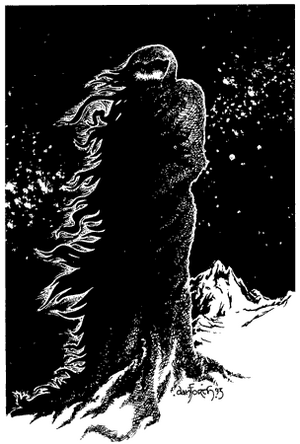 Wights was a name used for undead beings,[1] especially as a short form for the Barrow-wights.[2]

wight is derived from Old English wiht, meaning "living being, creature". The related Old Saxon wiht means "thing, demon".[3] It has been suggested that J.R.R. Tolkien had this later "connection to the underworld in mind when he chose to refer to the grave-spirits of the Barrow-downs as 'wights'".[4]

Many works of fantasy fiction, role-playing games and computer and video games use the term wight as the name of spectral creatures very similar to Tolkien's Barrow-wights: Dungeons and Dragons has created a monster called "Wight", a kind of undead, and the new terminology is also exemplified in the wights of A Song of Ice and Fire series.[5] 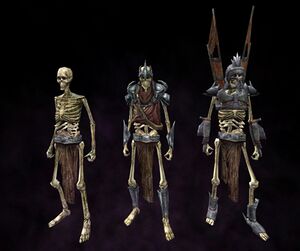 Wights inhabit the graves of Dúnedan nobles, taking their power from a buried lord. Gaming statistics are given for minor, lesser, and major Wights.[6]

Wights (not to be confused with the Barrow-wights appearing in the same game) are one of the three types of ghosts. Wights refer to cursed beings, who remain "bound to the will and goals of the one who cursed them" in their after-life. Unlike wraiths and phantoms, wights can possess the remains of other dead people.[7]

Wights (crypt-wights) are categorized among the creatures called the Dead, "designed to be reminiscent of the wights of the great Barrow-downs in Eriador".[8]