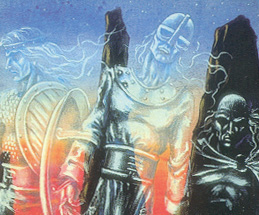 "...to them the Enemy had given rings of power, and he had devoured them: living ghosts they were become, terrible and evil.'"
― Faramir[1]

Ghosts was a name commonly used to describe the undead, beings which did not perish after what would be a natural death, but which continued to haunt the living in their after-life. While likely often the product of a vivid imagination, the dealings of the Fellowship of the Ring with several types of undead testify that ghosts were a reality in Middle-earth.[2]

In the late Third Age, the ruined and deserted Osgiliath was known as "a city of ghosts."[3]

In Gnomish, one of Tolkien's early conceptions of an Elven language, the word for "a ghost" is ûl.[4]

Ghosts are one of the most powerful Undead beings. They are altogether incorporeal, and drain constitution points from player characters.[5]

Ghostly beings are referred to as Shades in the game and come in several varieties including Oath-breakers (similar to the Dead Men of Dunharrow), fell spirits (ghosts that animate the Barrow-wights), Corpse-candles (like those of the Dead Marshes), and evil river-spirits called Darkwaters.