The Barrow-wights were a kind of undead-like creatures, dead bones animated by evil spirits.[1] 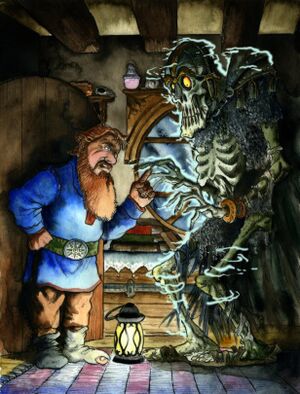 The Adventures of Tom Bombadil part 4 by Richard Svensson

The Barrow-wights were evil spirits, although their true nature is unknown; it is not known if they were perverted Maiar (Úmaiar) or spirits of Orcs, fallen Avari, or evil Men.

The Witch-king of Angmar sent them to the Barrow-downs, in order to prevent a resurrection of the destroyed Dúnedain kingdom of Cardolan. Some of them occupied the cairn of the last prince of Cardolan.[2][3] The spirits stirred the dead bones in the mounds and haunted them.[2][4][5]

The Barrow-wights appeared as shadowy figures with a pale, icy light gleaming from what would be their eyes. They could speak, with deep, hollow and cold voices, and likewise their touch was icy.[6][7] They were furthermore infamous for carrying rattling gold-rings on their bony fingers.[5][8]

According to Hobbit verse, Tom Bombadil escaped a Barrow-wight on some occasion, using his enchanting incantations.[7] Perhaps his authority was sourced by the inherent power he had on this region of the world, not the spirits themselves.

During the War of the Ring (September 3018) the Black Riders entered Cardolan around September 24. Their chief, the Witch-king, moved to Andrath and visited the Barrow-downs, where he stayed for three days in order to rouse the Barrow-wights. According to the rare manuscript The Hunt for the Ring: Time Scheme - Black Riders, the Witch King empowered the Barrow-wights and slew the Rangers in order to trap the Ring-bearer - a strategy that would almost work; he left on September 27.[9][10][11]

Frodo Baggins and company were trapped in the Barrow-downs by the spells of the Barrow-wights, and were nearly slain by the creatures.[6] They were saved in the last minute by Tom, who seemed to have had complete authority over them.

According to Elrond, the Elves knew the Barrow-wights by many names.[12] While these names are not recorded (except for the general denomination "evil spirits"), the creatures were also called "Barrow-dwellers" in Hobbit lore.[7] Often, they were also referred to by the shortened form "Wights".[1][13]

Due to his inspiration from Hrómundar saga Gripssonar, during the writing of The Lord of the Rings (see The History of The Lord of the Rings) Tolkien at first foresaw a link between the wights and the Ringwraiths, initially describing the Black Riders as horsed Wights, but the suggestion that they were the same kind of creatures was dropped in the published work. In the final work there remained a link between them: the wights were now spirits sent by the Witch-king.

The character Tídwald, appearing in Tolkien's poem "The Homecoming of Beorhtnoth Beorhthelm's Son", accuses Torhthelm of fancying "barrow-wights and bogeys".[14]

Remnants haunting their own tombs, the Barrow Wights are a type of greater Undead Beings. They draw energy from living beings, sacrificing their victims.[15]

Although the Barrow-wights did not appear in The Lord of the Rings films, Decipher did produce a card depicting a Barrow-wight.

The voice of the barrow-wight that temporarily imprisons Frodo and his three companions is provided by Vladimír Jedľovský.

Barrow-wights (not to be confused with the ghost-type wights appearing in the same game) are corpses of Men animated by evil spirits.[16]

Sambrog is a Wight-lord of the Barrow-downs. Barrow Wights are not just confined to the Barrow Downs, but have risen in many parts of Middle-earth mainly around the decaying ruins of Arnor. Wights can be found haunting the darkest corners of Mirkwood to even the Elven ruins which dot Ered Luin. A clan of warriors in Dunland has even gone as far as trying to raise their own undead army.

Eradan, Andriel, and Farin encounter Barrow-wights during their trek through the Barrow-downs. The boss battle of the level is the Barrow-wight Lord.