The History of The Lord of the Rings 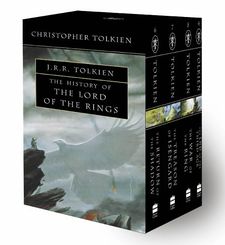 It documents the writing of The Lord of the Rings, except for the Prologue and the Appendices (which came later in The Peoples of Middle-earth). Other early versions, drafts and schemes (including the only complete scheme of the entire book) have been published in The Lord of the Rings: A Reader's Companion.

The idea of separating the four volumes from The History of Middle-earth came first from the Spanish edition in 1993, which was made with consent by Christopher Tolkien.[1]

In general, the books are organized as chapters corresponding to the chapters in the final The Lord of the Rings, with additional chapters describing the "First Map", the "Second Map", and other matters. Each chapter begins with some context, then the text of a first or second draft, possibly some alternate drafts if there were especially large changes, and interspersed with extended discussion of confusing or contradictory situations. The end of each chapter includes a set of notes about points of interest, such as words that were used originally and then partially erased or struck out.

The titles of the volumes derive from discarded titles for the separate books of The Lord of the Rings. J.R.R. Tolkien conceived the work as a single volume comprising six "books" plus extensive appendices, but the original publisher split the work into three, publishing two books per volume with the appendices included in the third.

The titles proposed by Tolkien for the six books were:

The title The Return of the Shadow was a discarded title for Volume 1 — The Fellowship of the Ring.

Three of the titles were also used as book titles for the seven-volume edition of The Lord of the Rings: The Treason of Isengard for Book 3, The War of the Ring for Book 5, and The End of the Third Age for Book 6.