Lake Evendim, or Nenuial ("Lake of Twilight") in Sindarin, was a lake in northern Eriador.

The lake was about 100 miles north of the Shire. It was approximately 50 miles from north to south and 20 miles east to west[1] and was bounded on the west and south by the Emyn Uial (Hills of Evendim).[2] The Baranduin or Brandywine River flowed out of the lake to the east.[1]

It is said that after the War of Wrath, both Galadriel and Celeborn crossed into Eriador from Lindon with many Noldor in their following, together with Sindar and Green-elves; and for a while they dwelt in the country about Lake Nenuial.[3] They departed for Eregion in S.A. 750.[3]

In the Second Age, there were lesser men living about Lake Evendim, some of whom met with the Númenóreans when they first sailed back to Middle-earth.[4][5]

After the Downfall of Númenor, Elendil established the capital of Arnor, Annúminas, on the southern shore of the lake in S.A. 3320.[6]

In T.A. 1975,[7] the Battle of Fornost was fought on the plain between Lake Evendim and the North Downs between the Host of the West and the forces of Angmar.[8]

In Fo.A. 15 King Elessar rode from Minas Tirith to spend some time dwelling by the Lake.[9] 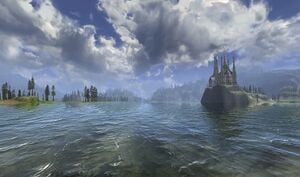 Evendim in The Lord of the Rings Online

While possible to swim across, swift travel across Lake Evendim (located in the region of Evendim) is provided by several boatkeepers.[12]