The North Downs were a range of hills in the northern part of Eriador, east of the Hills of Evendim and north of the Weather Hills. From their northernmost point the hills extended in a south-westerly direction. At the southern end was Fornost Erain, the ancient city of the Dúnedain of the North, and the northern terminus of the North-South Road.[1]

In the early Second Age the Downs were occupied by Men, as well as Weather Hills and the Lake Evendim.[2] In the year S.A. 600 Vëantur first returned to Middle-earth from Númenor.[3] Upon hearing that some of their distant kin had come, these Middle Men petitioned Gil-galad to meet the mariners. Twelve men came and rejoiced to meet the Númenóreans.[4]

When the kingdom of Arnor was established in S.A. 3320[5] the North Downs were incorporated into the realm.[6] When Arnor was divided in T.A. 861[7] the frontier between Arthedain and Rhudaur was the Weather Hills;[8] this frontier may have extended along the eastern edge of the North Downs.

When Angmar attacked Eriador in T.A. 1409, the new King Araphor repelled the enemy from Fornost Erain and the North Downs, with help from Cirdan.[8]

In 1974 before the end of winter the Witch-king came down from Angmar and captured Fornost. King Arvedui held out on the North Downs until he and some of his guard were driven to the north.[8] Arriving late, Eärnur answered summons from Arvedui in 1975 with a massive fleet from Gondor which disgorged a host marching eastwards. Unaware of his peril the Witch-king marched out to meet the mighty combined army of Elves and Men in the plains between the Hills of Evendim and the North Downs. In the ensuing Battle of Fornost the forces of Angmar were routed and then destroyed, although the Witch-king himself escaped.[9]

Although the kingdom of Angmar had been defeated and destroyed, so too had Arthedain come to an end. Fornost was abandoned and became a place of fear, acquiring the name Deadmen's Dike.[10] Other than visits by Rangers of the North, the North Downs remained uninhabited for the remainder of the Third Age. In the Fourth Age though men may have returned to the North Downs; most likely King Elessar visited Fornost when he came north to dwell by Lake Evendim for awhile in Fo.A. 15.[11] 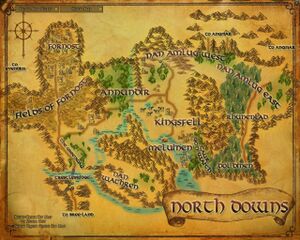 Map of the North Downs from The Lord of the Rings Online.

The North Downs is one of the major regions of the game and one of the largest to date. North from Bree-land the Greenway is leading to Fornost Erain in the north-western corner of the map. Major towns are Trestlebridge, a small town of men from Bree, Esteldín, an Arnorian ruin inhabited by Dúnedain Rangers, and Othrikar, a mining outpost of the Longbeards.
As of fall of T.A. 3018 the North Downs is in the state of war, as a new power in Angmar is sending its minions south. Nan Wathren is a rocky valley occupied by Orcs besieging Trestlebridge, the farms of Annundir have been ravaged by Goblins, Dourhands roam the Nan Amlug, but the biggest threat of all is an entire army of Orcs, Wargs and Trolls gathering its strength in Dol Dinen.