The Black Númenóreans emerged from the King's Men party;[2] they were cruel oppressors and overlords over the primitive Men of Middle-earth. Since they were colonising the continent, they survived the Downfall of Númenor but swiftly diminished.

The Númenóreans' power and knowledge had grown throughout the course of the Second Age, and became increasingly preoccupied with the limits placed on their happiness—and eventually their power—by mortality, the purpose of which they began to question. They started fearing the Gift of Men and attempted to delay it or recall life. This growing wish to escape death made most of the Númenóreans envious of the immortal Eldar, who they had come to physically resemble. The Eldar sought ever to remind the Men of Númenor however, that death was a gift of the One God, Ilúvatar, to all men, and the will of Ilúvatar could not be gainsaid.[3]

Nevertheless, after S.A. 2221, when Tar-Ancalimon became King of Númenor, the Númenóreans became divided. The King's Men turned away from the Valar and the Eldar and eventually became vulnerable to the corruption of Sauron.[4][3]

Three of the Ringwraiths were powerful Númenórean lords corrupted by Sauron.[5] 1000 years before the Downfall, they served Sauron, being enslaved to his will, having become so because of their lust for power or knowledge.

Many of the King's Men who had sailed to the shores and seaward regions in the south of Middle-earth and established fortresses and dwellings during Sauron's sojourn in Númenor were already bent to the will of Sauron.[6] As a consequence, the King's Men hated the followers of Elendil. Umbar was the northernmost stronghold of the King's Men.[2]

The King's Men were afterwards called the Black Númenóreans.[2]

When Sauron returned to Middle-earth after the Downfall of Númenor many of the Black Númenóreans served him still. Two Black Númenóreans, Herumor and Fuinur rose to power among the Haradrim in the lands south of Mordor.[6]

As Sauron was preparing to go to war against the Elves and Exiles, he gathered great strength of his servants from the south, including many Black Númenóreans.[6]

The triumph of the Last Alliance marked the decline of the Black Númenórean race.[2] They dwindled swiftly or became merged with the Men of Middle-earth.[2] Although their race dwindled, their descendants retained control over Umbar and inherited their hatred of Gondor.[2]

Although they had dwindled, few notable figures still claimed to be of the Black Númenórean race in later times. One of these was Queen Berúthiel, the "nefarious, solitary, and loveless" wife of Gondor's King Tarannon Falastur, who ruled from T.A. 830 until T.A. 913 who had her exiled from Gondor and her name erased from the Book of Kings.[7][8][9]

Another more notable Black Númenórean was the Mouth of Sauron. He "entered the service of the Dark Tower when it first rose again" and learned great sorcery and had forgotten his own name.[10][note 2] He mocked the army of King Elessar in front of the Morannon.[10]

At the time of Gandalf's travels to Harad, the settlements of the Men of Númenor on the coasts in the south beyond Umbar had been absorbed or had been made by Men who had already been corrupted by Sauron in Númenor and had become hostile and parts of Sauron's dominions. The southern regions of Harad in touch with Gondor were probably more convertible to the resistance against Sauron, but also places where Sauron was busy to gather man-power for his wars against Gondor.[11] As a consequence, it is possible that the Men of Númenor in Umbar had not been absorbed by the Men of Harad.

The Black Númenóreans were "enamoured of evil knowledge" and worshipped Sauron.[10] They hated the followers of Elendil and their realm Gondor. After the fall of Sauron in the War of the Last Alliance their race dwindled swiftly or became merged with the Men of Middle-earth.[12] It is not known, whether this dwindling meant that their lifespan and knowledge dwindled like that of the Dúnedain of Gondor or that their numbers dwindled.

It is possible that Faramir was referring to the King's Men or the Black Númenóreans, when he said that most of the Men of Númenor who settled far and wide on the shores and seaward regions of Middle-earth became enamoured of the Darkness and of black arts, some were idle and lived at ease and some fought among themselves until they were conquered by the wild men.[13] 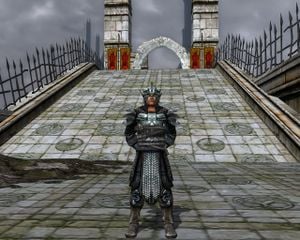 A typical Black Númenórean in The Lord of the Rings Online

The Black Númenóreans are portrayed in service of the different Lieutenants of the Enemy. The Angmarim inhabit the lands surrounding Carn Dum in Angmar and serve Mordirith and later Amarthiel. Much later, Umbarrim Black Númenóreans make appearance in Dol Guldur of Mirkwood. When the lands of Mordor are explored following the downfall of Sauron, Black Númenórean cultists known as Mordorrim are shown to be among its inhabitants.

Agandaûr, the game's main antagonist, is a Black Númenórean[14] as is the minor character Wulfrun, lieutenant of Carn Dûm.