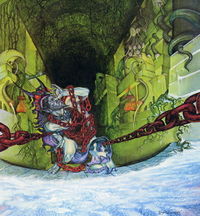 Angainor was the chain used to contain Melkor in the Halls of Mandos. It was forged by the Vala Aulë and held Melkor for three ages (around 2,900 solar years).[1] At the end of the First Age, Melkor was again bound with Angainor, and his Iron Crown was made into a collar.[2]

In The Book of Lost Tales, the chain is called Angaino ("the oppressor") and its making by Aulë is more detailed: he first made a special metal called tilkal, and mixing it with six metals he forged the chain Angaino, the two manacles Vorotemnar and the four fetters Ilterendi. Aulë put Vorotemnar on Melko's hands and two Ilterendi on each of his ankles.[4]

In later revisions of the legendarium which Tolkien never finalized, Melkor is never chained by the Valar as he willingly surrenders to them as part of a treacherous plot, though Tulkas clanks Angainor behind Melkor's back occasionally as he is escorted back to Valinor.[5]

In Norse Mythology, Gleipnir is the binding that holds the mighty wolf Fenrir, which was forged by dwarves with six different materials.[6]