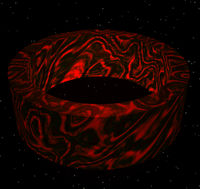 Tilkal was a metal crafted by the Vala Aulë according to the early version of the legendarium in The Book of Lost Tales. It was used in the chain Angaino that bound Melko:

Behold, Aulë now gathered six metals, copper, silver, tin, lead, iron, and gold, and taking a portion of each made with his magic a seventh which he named therefore tilkal, and this had all the properties of the six and many of its own. It's colour was bright green or red in varying lights and it could not be broken, and Aulë alone could forge it. Thereafter he forged a mighty chain, making of it all seven metals welded with spells to a substance of uttermost hardness and brightness and smoothness, but of tilkal he had not sufficient to add more than a little to each link.
—The Book of Lost Tales Part One, "The Chaining of Melko"

The name tilkal is an acronym from the Qenya names of the metals mentioned above:[1]