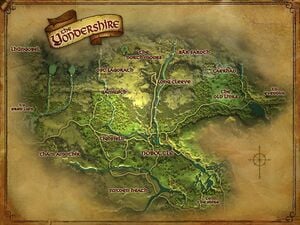 The Yondershire is a division of the Shire invented for the game The Lord of the Rings Online. Located north-west of Needlehole, it connects the rest of the Shire to the Ered Luin region.[1]

It is described as 'a sparsely populated region of moor, thicket, and fen that has long been home to Hobbit recluses and troublemakers'[1]. It encompasses the northern part of the Westfarthing and the western part of the Northfarthing, and also includes the wilderness between the Bounds and the River Lune in the west and the Twilight Hills in the north.

The inhabitants are called "Yonder-hobbits" by the inhabitants of the Shire proper, which folk of the Yondershire in turn call the "Hithershire".[2]

It was settled by Blanco, who continued to wander while his brother Marcho became fat and comfortable in Michel Delving. Blanco built his home at Long Cleeve, near the source of the Water. Since the time of Bandobras Took, Long Cleeve has been the home of the North-tooks and the seat of their leader, the Reeve of the Yondershire.[3]

Another important village is Nobottle, founded in the time of Thain Ferumbras Took I and located near Needlehole on the edge of the Hithershire. The other two settlements are the hunting village of Gamwich,[3] and Tighfield, known for its rope-making.[4]