It was established by Elrond in S.A. 1697 as a refuge from Sauron after the Fall of Eregion.[2] It remained Elrond's seat throughout the remainder of the Second Age and until the end of the Third Age, when he took the White Ship for Valinor. Rivendell had a strong alliance with the Kings of Arnor and after the fall of Arthedain, it became a refuge for the Rangers of the North and the Heir of Isildur. 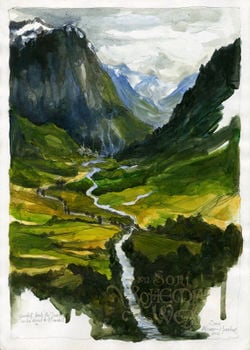 After the fall of Gil-galad, Elrond remained in Imladris. During the Third Age, it was a refuge and sanctuary; many Elves gathered there, and it was the chief dwelling of the High Elves in Eriador, except the Elves of Lindon, but also wise and powerful people of all the races. The Heirs of Isildur were also harboured there due to their kinship with Elrond, as descendants of his brother Elros.[6]

Danger came to Eriador around T.A. 1300 when Angmar was established in the north-east beyond the Ettenmoors. It was late in the reign of Arveleg I that Rivendell was besieged by Angmar. After an incursion by Angmar into Eriador in T.A. 1409, the Elves of Rivendell joined those of Lindon and the Galadhrim, whom Elrond brought over the Mountains, in subduing the power of the Witch-king for many years.[8]

It is not known when Rivendell was finally abandoned, but shortly before Aragorn died in Fo.A. 120, he said to Arwen that "none now walk" in the garden of Elrond, indicating that the last of the Noldor had departed to Valinor.[1]