During the Second Age, Sauron planned to corrupt the Elves and put them under his dominion. In his guise as Annatar, he attempted to seduce the Eldar. Both Gil-galad and Elrond rejected him from Lindon, but the Smiths of Eregion are won over. Sauron instructed the Elves of Eregion in the making of the Rings of Power, including aiding the forging of the Nine and the Seven, with the Three forged by Celebrimbor solely. He returned to Mordor and then secretly constructed the One Ring of his own to enslave the bearers of the Rings.[1] Unknown to him, the Elves had made Three Rings of their own, so that when Sauron took up his own Ring, they understood his intentions and his centuries of planning came to nothing.[2]

What he could not control by subtlety and deception, Sauron resolved to destroy by force. He obtained the allegiance of Men that lived in lands that were adjacent to Mordor, including in regions of the White Mountains and in Calenardhon. The Númenóreans who occupied the Ethir Anduin and the coasts of Lebennin discovered his activities and informed Gil-galad about them. However Sauron did not allow the tribes of eastern Men to come in sight of the Númenóreans or of Men of Good Will that lived in Eriador, Calenardhon, the Vales of Anduin, Greenwood the Great or in the plains between that wood and Mordor to avoid the risk that his gathering of armies in the east would be discovered. Sauron gathered and trained his armies for approximately ninety years before he felt ready to attack. He was able to gather less troops than he hoped for, because powerful enemies in the East and South opposed his gathering of troops.[3] Among those powerful enemies in the East were the two wizards Morinehtar and Rómestámo. Their task was to stir up rebellion and to cause dissension and disarray in the East. Otherwise the forces of the East would have outnumbered those of the West in the Second Age and in the Third Age.[4] In S.A. 1695[5] Sauron's vast armies passed through Calenardhon, through the Gap of Rohan invaded Eriador and turned north to attack Eregion. Thanks to the Númenóreans having cut down many of the Trees of Minhiriath and Enedwaith, the people that dwelled in these lands welcomed Sauron's conquest and let him pass. The Lord of the Rings left a force at Tharbad, and Sauron's armies marched on to Eregion [1] 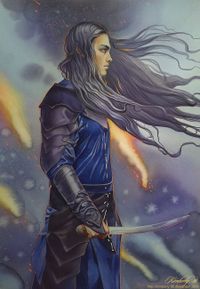 Celeborn would lead a force from Eregion, and would defeat the First Wave of Sauron's army, however he could not hold them indefinitely. Celeborn's force is overwhelemed and is driven back to Ost-in-Edhil When news of the invasion arrived to Gil-galad he sent a force commanded by Elrond from Lindon to reinforce Eregion as well as word to Númenor for aid.[1] Elrond's forces were held back by Sauron's greater host and Eregion was devastated. In S.A. 1697, Ost-in-Edhil fell, with Celebrimbor himself leading a last desperate defence on the steps of the House of the Mírdain. He was taken captive by the Orcs and the Dark Lord demanded that the Rings of Power be turned over to him as well as the Three Rings. Celebrimbor yielded the Nine Rings and later even the Seven Rings, knowing the small value to the Dark Lord in comparison to the Three but was able to hide the identities of those who bore the Three. Later Celebrimbor was shot through with Orc-arrows, and by some accounts, Sauron used Celebrimbor's body as a banner as he turned to face Elrond's host. [1]

Elrond's force is far too small in comparison to Sauron's army, and is at the risk of being overrun when the Dwarves of Khazad-dûm and the Elves of Lóriand led by Amroth attack Sauron's rear guard. As Sauron turns to face these new adversaries, Elrond gathers the few survivors of Eregion and leads them along the Bruinen to establish the realm of Imladris. While Elrond and his host escapes, Sauron drives the Elves and Dwarves back into Khazad-dûm where they sealed the Doors of Durin. Sauron gathered up the Rings of Power that remained, except for the Three Rings, which had been sent far from Eregion at the beginning of the war and laid waste the land of Eregion, bringing an end to its people. The surviving Elves of Eregion seem to have scattered, as there are various accounts of their fates. Some fled northward to join Elrond's host, and that host was itself forced into retreat; some of these Elves of Eregion settled at Imladris when Elrond founded it shortly after escaping Eregion.[1] They were joined there by others of their kind who had escaped into the Wild, and only later found their way to safety. Many of these people seem to have later abandoned Middle-earth and sailed into the West.[1]

Other survivors escaped into Khazad-dûm and were granted passage by their friends the Dwarves, coming eventually through the Mountains to the woodlands that would long afterwards be called Lórien. The Dwarves of Khazad-dûm indeed did more than simply allow the Elves to pass through their mansions; they went out against Sauron's armies along with a force of Galadhrim under Amroth. It was with their aid that the beleaguered Elrond was able to escape into the north and thus save many of the Elves of Eregion. Once the Dwarves returned to Khazad-dûm, the Doors of Durin were shut and remained so until the Fellowship of the Ring came there thousands of years later.[1]

Main article: Battle of the Gwathló

Over the next six years, Sauron's armies overran Eriador, and they moved west aiming to take Lindon and claim one or more of the Three Rings. By S.A. 1699, Sauron has completely overran Eriador and all its lands, save the Besieged Imladris and Lindon, however Imladris was under siege and Gil-galad was barely holding the Line of Lhûn and the Mithlond. Sauron had summoned more forces coming from the South East, in the hopes of obtaining the Grey Havens.[source?] There in the very fortune of time, just as Sauron's victory looked secure, Minastir's fleet appeared in the north, carrying the forces of Númenor sent by Tar-Minastir, the heir[6][3][note 1] of Queen Tar-Telperiën. The Númenóreans not only force Sauron's armies to retreat, but retreat with heavy losses. Sauron is defeated at Sarn Ford, and driven South East. At this time, Sauron is pushed out of Eriador, where he burns the forests of Minhiriath and Enedwaith. He has no less than a small fraction of his army, however is reinforced by his force at Tharbad, however Ciryatur has sent a fraction of the army to Lond Daer, and Sauron found himself attacked from front and behind, and he himself barely escapes with a bodyguard. [5] So Eriador was saved, but Celebrimbor's kingdom of Eregion had been wiped out, and a great many of the Rings of Power had fallen into the hands of Sauron, and many forests of Eriador were lost.

After Sauron's defeat, The White Council was held. The Members are unknown, however they would not consist of later members such as the Istari, but likely of Elf-lords and Captains of Men. Here it was decided that Imladris should become the new Elvish stronghold in eastern Eriador, rather than in Eregion and Ost-in-Edhil. In recognition of his efforts, Gil-galad secretly bestowed the ring Vilya upon Elrond at this time and made him his vice-regent in Eriador.[1]

The Might of Númenor was first revealed to Middle-Earth, and the first signs of the Shadow upon Westerneese had appeared. Sauron also cursed and vowed vengence upon the Númenóreans, to which he now hated.