"Deep they delved us, high they builded us, fair they wrought us, but they are gone."
― The Fellowship of the Ring, The Ring Goes South[3]

Around S.A. 700 Galadriel and her husband Celeborn, who were regarded as the Lord and Lady of the Eldar in Eriador founded the elven realm of Eregion. The Elves of Eregion were primarily Noldor. Celebrimbor, a Noldorin smith who had accompanied Galadriel and Celeborn, and other elven smiths founded the Gwaith-i-Mírdain, a brotherhood of Elven craftsmen.[1]

Around S.A. 750 the Noldor started to build Ost-in-Edhil.[1] The Elves of Ost-in-Edhil also built[6] a highroad that connected the city with the west gate of Khazad-dûm.[4]

In 1200 a mysterious craftsman named Annatar came to the city. Annatar claimed to have been sent as an emissary by the Valar to aid the Elves. Although Galadriel did not trust Annatar and treated him with contempt, Annatar reacted with patience and courtesy, because he wanted to avoid an open conflict with her at the moment. Annatar was more successful to by accepted by the smiths of the Gwaith-i-Mírdain and in secret instructed them in the art of smithing. After some time the Gwaith-i-Mírdain fell under his influence.[1]

Between S.A. 1350 and 1400 Annatar persuaded the Gwaith-i-Mírdain to rebel against the rule of Galadriel and Celeborn and to seize control over the elven realm of Eregion. As a consequence Galadriel left Eregion with her daugther Celebrian and travelled through Khazad-dûm to the elven realm of Lórinand. Celeborn did not want to enter Khazad-dûm and stayed in Eregion where he was ignored by Celebrimbor.[1]

After four years,[10] Sauron and his army were eventually defeated by the Elves with help from the Númenóreans in S.A. 1701 and Sauron fled back to Mordor.[1]

Fourty-seven centuries later the Fellowship of the Ring travelled for many miles on the broken and decayed road that once led from Ost-in-Edhil, along the Sirannon, towards the West Gate of Moria without seeing the ruins of Ost-in-Edhil.[5]

Ost-in-Edhil is a Sindarin name.[11] It means "Fortress of the Eldar".[12] Paul Strack suggests that the name is a combination of ost ("fortress", "fort", "stronghold", "citadel", "fortified town", "enclosure"), the plural in of the definite article i and the plural Edhil of edhel "Elf".[11]

As the game does not have the rights to the name "Ost-in-Edhil", other names are used for Eregion's capital. "Mirobel, the Jewel-town" is applied to the eastern part of the city, in the game's region of Eregion proper. It includes "Tham Mírdain": the jewelsmiths' school and library, as well as the Ring-forges. The larger, western part of the city, "Caras Gelebren, the Silver Bastion", lies within the Swanfleet region.

In addition to exploring the late Third Age ruins, players can experience a flashback scenario in which they defend Caras Gelebren during its fall. 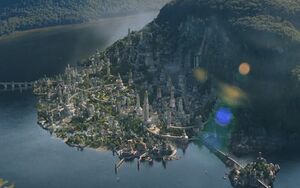 Ost-in-Edhil in The Lord of the Rings: The Rings of Power.

The city of Ost-in-Edhil is featured in the show, though it is not referred to by name.