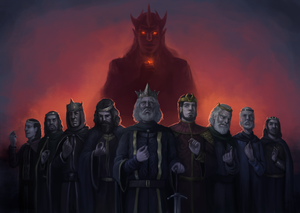 The Nazgul by Kenneth Sofia

The Nine Rings were the Rings of Power that Sauron used to corrupt Men to his service. Those who took the Nine Rings became the Nazgûl.

The Nine Rings were made along with the other Rings of Power in Eregion and were forged by Elven smiths under the guidance of Sauron.[1] They were kept in the House of the Mírdain, but all rings save the Three Elven rings were captured by Sauron when he attacked Eregion.[2] He gave nine of them to Men, and it was said that three of those that received them were Númenórean lords,[3] and another was from the East[4].

The owners of the Nine were corrupted, amassing glory and riches, and becoming great among Men. They had the ability to become invisible, and their lives were extended unnaturally, until they fell at last to the power of the One Ring held by Sauron. They became part of the wraith-world, permanently invisible, and were enslaved by Sauron. They were afterwards his greatest servants, terrible to behold, known as the Nazgûl.[1]

During the end of the Third Age, Sauron had apparently reclaimed the Nine Rings to himself.[5][6]

In The Council of Elrond, Gandalf indicates that the Nazgûl kept their Rings by saying, "The Nine the Nazgûl keep"[7]. However in many other references, it is indicated that Sauron later held the Nine Rings.[5][6][8] Furthermore, Frodo does not see any Rings on them on Weathertop, and it is believed that if they did wear the Rings, they would have been fully invisible (including their cloaks).[source?]

It is possible that the line in the Council of Elrond represents Tolkien's earlier intention that the Nazgûl should still be wearing their Rings; if that is so, he later changed his mind and simply missed revising that sentence.[source?]

The Nine Rings are named as "Orôm, the Warmonger", "Sâkhla, the Cruel One", and "Adâsh, the Foe-maker", given to the Lieutenant of Dol Guldur and two other Easterling rulers, respectively; "Jûru, the Herald of Mourning", "Mêbat, the Mirth-eater", and "Khânto, the Pain-giver", given to Haradrim; and "Sapthân, the Foolstone", "Nitîr, Terror's Sting", and "Ûri, the Heart-stopper", given to Númenóreans, the third of whom became the Witch-king of Angmar.