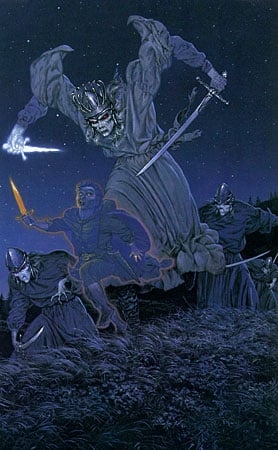 Ted Nasmith - The Attack of the Wraiths

"And here in Rivendell there live still some of his chief foes: the Elven-wise, lords of the Eldar from beyond the furthest seas. They do not fear the Ringwraiths, for those who have dwelt in the Blessed Realm live at once in both worlds, and against both the Seen and the Unseen they have great power."
― The Fellowship of the Ring, "Many Meetings"

The Unseen are objects and creatures of the spirit world that belong to "magic". Some Maiar like Olórin were said to walk unseen among the Elves of Valinor, and Ossë would visit the shores unseen.[1] All things in Arda fall into the realm of either the Seen or the Unseen. The Unseen world is neither good nor evil and contains both dark and bright spiritual beings.

The Valar could exist in the world with or without a corporeal form, "the Valar may walk, if they will, unclad, and then even the Elves cannot clearly perceive them, though they be present."[2] Wizards and the Elves who lived in Valinor existed in both the Seen and the Unseen realm; their form in the Unseen is different, and they have the ability to see and affect Unseen creatures.[3]

The One Ring shifts its wearer to the "wraith-world", in which the wearer could see the forms of other persons. While the wearer would seem invisible, in reality, they would be visible to the creatures of the Unseen realm.[4][5]

Also, the Morgul-knife that stabbed Frodo had the ability to permanently bring him to the Unseen realm;[3] while Frodo was suffering from its effect, he could see Glorfindel's true luminous form.[5]

Tom Bombadil could see Frodo wearing the Ring;[6] whether this implies that he lived in both realms is not clear.

The Unseen world also existed within the Halls of Mandos. There the spirits of those who died in Middle-earth would reside until they met with their different fates. The Eldar may, in time, be re-embodied, if they chose to be as Finrod did, and live again in Aman.[7][8] The Dwarves would wait in Mandos, in separate halls among their own, until the re-making of Arda.[9] And Men would reside there for a time of waiting before receiving their fate which brought them beyond the scope of Arda, until the Second Music of the Ainur.[8][10]

Spirits which did not heed the call of Mandos may remain in Middle-earth as part of the Unseen. Though the Witch-king, as a bearer of a Ring of Power, summoned the barrow-wights to the Barrow-downs,[11] it is doubtful that he could have called spirits back from Mandos' halls.

"Those Nazgûl give me the creeps. And they skin the body off you as soon as look at you, and leave you all cold in the dark on the other side."
― Gorbag[12]

The wraith-world was a mysterious alternative aspect of reality that belonged to the realm of the Unseen. Some of the most obvious examples of Unseen creatures were the Ringwraiths, which were invisible and formless without the guises provided by Sauron.[3]

The Rings of Power were one of the means that could partly draw one into the wraith-world. The Men who became the Ringwraiths, seem to have led a dual existence on the boundary between two worlds: our own, Seen world, and the wraith-world. After centuries, they ended up fading, and while they had a partial form in our reality, they had a more solid existence in the Unseen.

Their blades seem to have been used to terrorize their servants, as Gorbag attested to, and if the broken shard of one such blade had reached Frodo's heart, he would have been transformed into not only an Unseen existence, but into the wraith servant of a Nazgûl.[3]

Though Tolkien goes into very little detail about this 'other side' to reality, it is mentioned often in accounts that have come down to our own time through folklore. In these stories, it is commonplace to find fairies and elves - and less friendly beings - moving between our world and their own mysterious realm as a parallel dimension. Indeed, these stories are, in part, the origin of the idea of 'fairyland', and it seems plausible that Tolkien's idea of the ghostly wraith-world is in some way related to them. In the end, though, he gives us so little information that it is hard to do more than speculate the subject.

He did write that his characters, the Elves of Midde-earth, were not like the elves commonly found in fairy tales: "the Elves shed all associations and qualities that would be now commonly considered ‘fairylike’, and those who remained in the Great Lands in Ages of the world at this time unconceived were to grow greatly in stature and in power: there was nothing filmy or transparent about the heroic or majestic Eldar of the Third Age of Middle-earth."[13]

However, in his descriptions of the Elves, those who remained in Middle-earth, would in time, be consumed by their own spirit, "ere Arda ends all the Eldalië on earth will become as spirits invisible to mortal eyes, unless they will to be seen by some among Men into whose mind they may enter directly.[14] 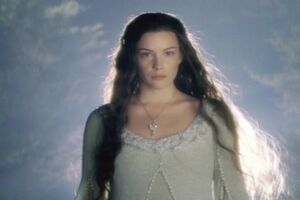 Arwen as seen by Frodo

The scenes where Frodo wears the Ring, show a different, dark and ghastly version of reality, indicating that Frodo is shifted to the wraith world, although no explanation is given in dialogue. The effects of the Ring become more clear in the Weathertop scene where he sees the Ringwraiths in clear form while wearing the Ring. Two times when he puts the Ring on, once in Bree and later at Amon Hen, he is percieved by the Eye of Sauron.

In the book, Frodo under the effect of the Morgul blade sees the luminous form of Glorfindel, but since in the movie he is replaced by Arwen, Frodo is supposed to see the Unseen version of Arwen; while in the Seen realm she wore a traveler's uniform, Frodo saw her in a white dress bathed in an aura of light.

The Witch-king's true form in The Lord of the Rings: The Fellowship of the Ring (video game)

When wearing the ring, the edges of the screen become engulfed in flames in the shape of an Eye. The player, as Frodo, can only stay Unseen for a limited amount of time, before his "purity bar" is emptied. Only Ringwraiths can see the Unseen; other enemies such as wolves and Orcs cannot.

Much like the original book, the Unseen world merely serves as a plot device in the halls of the Elvenking. The screen becomes filled with a haze, but many creatures can still see Bilbo. Only the Elves and Men cannot.

When the Ring slips onto Bilbo's hand as he is escaping Gollum, the Unseen World appears to be a pale, slowed-down, somewhat calmer version of the world around him. This could reflect the fact that Sauron is still in hiding and not yet searching for The Ring.

The protagonist of the game, Talion, possesses the ability to see into the wraith-world due to being resurrected by a wraith. In the game, this allows the player to see through walls and spot various things that are otherwise invisible. Its sequel, "Middle-earth: Shadow of War", expand the concept with the presence of the Nazgûl, which have greater powers like instant travel or magic in the wraith-world.

As Bilbo wears the Ring in Dale to run for the Raven Hill, dark shadows (Orcs) and white auras (Elves) are seen fighting around him.

During Galadriel's interrogation of Adar, the captive Moriondor mentions that Sauron was trying to craft something capable of acting on both the Seen and the Unseen worlds: a power over the flesh rather than a power of the flesh.